Tehran, YJC. Mohammad Javad Larijani has met with a UN Human Rights High Commissioner to discuss improvement of technical cooperation between Iran and the Commissioner. 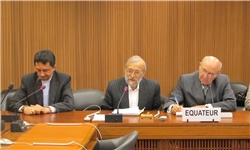 Larijani also condemned UN on appointing a rapporteur for Iran as well as the content of Ahmed Shaheed’s report.

The Head of the High Council for Human Rights of the Islamic Republic of Iran added "The special reporter is backed by the United States and European governments which renders his unprofessional, unjust, and totally biased words the same as those that the terrorists, as well as the US and some European countries utter. Such trend is unwholesome and ruinous to the prestige of the UN.”