Tuesday, 27 October 2020 _Iran has summoned the French chargé d’affaires to protest the anti-Muslim comments by the European country’s officials in support of the offensive cartoons of Islam’s Prophet Muhammad (Peace be upon Him), amid an outburst of anti-France outrage across the Muslim world. 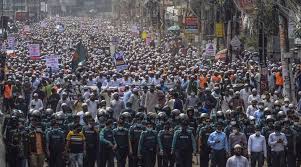 In the absence of the French ambassador to Tehran, Florent Aydalot was summoned on Monday to Iran’s Foreign Ministry, where he met with the department’s deputy director-general for European Affairs.

During the session, the Iranian official denounced the French officials’ “unacceptable measures,” which have hurt the feelings of millions of Muslims in Europe and the entire world, saying, “Any insult and disrespect to Islam’s Prophet (PBUH) and pure Islamic values by any person —regardless of their position — are strongly condemned and rejected.”

He was murdered outside his school in a Paris suburb on October 16 by an 18-year-old assailant, identified as Chechen Abdullakh Anzorov, who was shot dead by police soon after the killing.

The remarks have triggered anti-France sentiment in the Muslim world, prompting calls for the boycott of French goods and an official apology.