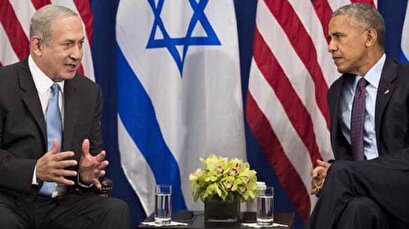 He made the remarks in his upcoming memoir, A Promised Land, whose excerpts were published on Friday by Jewish Insider, an online newsletter based in Washington.

Obama wrote that American politicians who "criticized Israel policy too loudly risked being tagged as 'anti-Israel' (and possibly anti-Semitic) and [were] confronted with a well-funded opponent in the next election.”

Israel's supporters in the US use accusations of anti-Semitism to stifle criticism of the Tel Aviv regime's policies against the Palestinians, he added.

The ex-US president also wrote in his book, which is part of a two-volume set, that Netanyahu viewed “himself as the chief defender of the Jewish people" and that such vision "allowed him to justify almost anything that would keep him in power".

He further hit out at the pro-Israel lobby, the American Israel Public Affairs Committee (AIPAC), saying that the group moved to the right ideologically to mirror Netanyahu's administration and defended Israel even when its actions "were contrary to US policy".

While congressional Republicans did not care about the Palestinians’ rights, their Democratic counterparts were "worried" about angering AIPAC and losing its support, Obama wrote.

He also stressed that pro-Israel pressure on his administration was "orchestrated" by Netanyahu to remind the US head of state that "normal policy differences with an Israeli prime minister exacted a domestic political cost".

The former Democrat president of the United States further revealed that he faced pushback from his own party when criticizing Israel’s settlement construction activities in the occupied Palestinian territories.

Netanyahu had a fraught relationship with Obama, particularly in regard to Israeli settlements projects and the Iran nuclear deal.

In his last month in office, Obama opted against vetoing UN Security Council Resolution 2334, which pronounced settlements in the West Bank and East Jerusalem al-Quds “a flagrant violation under international law.”