Tuesday, 24 November 2020_The leader of rebels in Ethiopia’s volatile Tigray region has dismissed Prime Minister Abiy Ahmed’s deadline for their surrender within three days, saying his forces are “ready to die” defending their homeland. 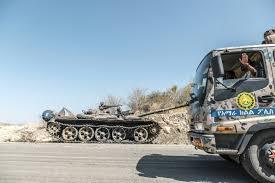 Debretsion Gebremichael, leader of the Tigray People’s Liberation Front (TPLF), made the statement on Monday.

Ahmed called on the rebels on Sunday to surrender peacefully within 72 hours.

“He doesn’t understand who we are. We are people of principle and ready to die in defense of our right to administer our region,” Gebremichael said, adding that the Ethiopian premier was trying to cover for setbacks his army had suffered against the TPLF, and was issuing threats to buy time.

“The beginning of the end is within reach,” said government spokesman Redwan Hussein.

Brigadier General Tesfaye Ayalew also announced that that federal troops were “marching into Mekele” after they captured key towns to the north and south.