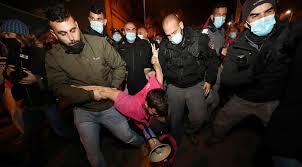 Thousands were seen converging from various parts of the occupied territories on Netanyahu’s official residence in the holy occupied city of Jerusalem al-Quds.

Elsewhere, demonstrations took shape in the cities of Tel Aviv, Caesarea, and Holon and the towns of Taibeh, Umm al-Fahm, and Kafr Yassif.

The protesters have been calling on the premier to resign over his indictment on charges of bribery, fraud, and breach of trust.

The malpractice leading up to the charges is being studied across four legal cases. A “Case 3000” concerns Netanyahu’s green-lighting purchase of three German-made nuclear submarines, despite objection from military officials.

The crowds attending the Saturday rallies were seen holding up inflatable submarines to highlight the issue and also protest the Netanyahu regime’s refusal to stand up to Germany’s sale of the same equipment to Egypt.

Share to
Related News
Netanyahu: ‘business as usual with Iran’ will be mistake
Tags
Submarines ، rallies ، fresh
Your Comment