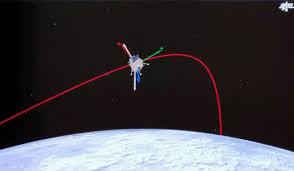 According to the CNSA, at 22:57 Tuesday, the lander-ascender combination of Chang'e-5, from about 15 km above the lunar surface, started a powered- descent with a variable thrust engine ignited. At 23:11 Tuesday, the lander landed at the pre-selected landing area near 51.8 degrees west longitude and 43.1 degrees north latitude.

"The lander steadily landed on the surface, laying a very important foundation for the subsequent drilling and sample collecting," said Zhang Hongtai, dean of the China Academy of Space Technology of China Aerospace Science and Technology Corporation (CASC).

"This time the lander is heavier than the Yutu lunar rover, so it is harder to control it as a higher precision is required," said He Jun, deputy director of the Beijing Aerospace Flight Control Center.

The probe of Chang'e-5 touched down on the designated location on the north of the Mons Rumker in Oceanus Procellarum, also known as the Ocean of Storms, on the near side of the moon. During the landing process, cameras on Chang'e-5 Lander has taken a series of images of the landing area.

"The location where Chang'e-5 landed is relatively flat. We can learn more about the history of the moon by landing at such a place," said Li Chunlai, deputy chief designer of the Chang'e-5 probe from the National Astronomical Observatories of the Chinese Academy of Sciences.

"Chang'e-5 landed in a new area when compared with the land places of the Russian and American missions. The ages of volcanic eruption there are quite different from theirs, which made it of greater value in scientific research," said Liu Jizhong, director of the program.

The lander-ascender combination of Chang'e-5 has finished the tasks of moon sample drilling and packaging at 04:53 Wednesday.

The probe adopts two methods of moon sampling, including using drills to collect samples and gathering samples from the surface with a mechanical arm.

"What we are doing right now, from the journey to the moon to landing on its surface, from the ascender taking off to getting back to the earth, all of these are just similar to what we will carry out in our future manned lunar landing program," said Ye Peijian, chief engineer and chief director of the Chang'e-5 probe from CASC.