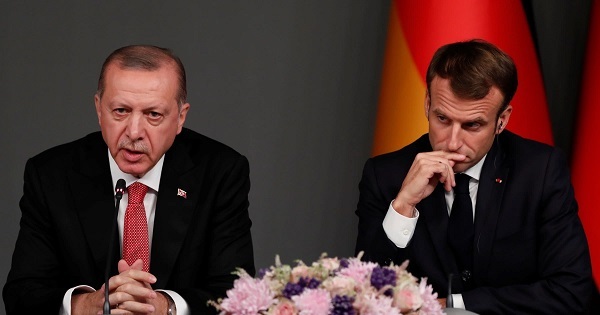 Turkish President Recep Tayyip Erdogan has expressed hope that France will soon get rid of Emmanuel Macron, describing his counterpart as a "burden".

"Macron and France are going through a very dangerous period actually. My hope is that France gets rid of the Macron trouble as soon as possible", Erdogan said speaking to reporters in Istanbul.

Over the years Turkey and France have disagreed on a number of geopolitical issues, however, the discord turned into a bitter feud following Erdogan’s harsh statement about his counterpart, in which he advised Macron to get "mental checks".

Erdogan’s comment came in response to the statements his counterpart made on Islam and the heinous killing of a French schoolteacher.

At the beginning of October, Macron announced a plan to fight Islamist separatism. In an emotional speech, the president said France, which has the largest Muslim minority population in Europe, faces a danger from Islamist separatism. The latter he said holds its laws above all others and often creates a "counter-society".

Relations between the two countries have drastically deteriorated in recent months over Macron’s comments on Islam and controversial caricatures of the Prophet Muhammad. However, the two countries also disagree on a number of issues, such as Nagorno-Karabakh, the war in Syria, and Turkey’s oil and gas exploration in the Mediterranean.