The commander of Iran’s Navy says the main goal of two-day large-scale maneuvers held by the country's naval forces is to promote sustainable peace and security in the region while projecting the power of the Iranian nation and its scientists to extra-regional forces present in the Persian Gulf. 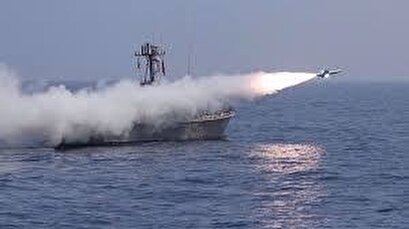 “Peace and sustainable security govern our region and we are a very powerful and capable country in this region,” said Rear Admiral Hossein Khanzadi, speaking in an interview during the second day of the drills, codenamed Eqtedar-e Daryayi (Naval Strength) 99.

“The main message conveyed through these drills to arrogant and bullying powers is that we are standing fast and do not allow anybody to ignore the Islamic Republic of Iran’s rights in this region,” he added.

The commander suggested that any instance of strength that is projected by the country during such exercises served to represent the Iranian nation’s power, noting that as a country with a strong naval force, the Islamic Republic has a right to stage naval maneuvers and put its naval might on display all over the high seas.

“Therefore, when a destroyer displays its power across the sea, this represents the power that is possessed by the Iranian nation, artisans, and scientists,” he noted.

"There is sustainable peace and security in the region and we maintain a very powerful presence in this region," Khanzadi said, noting that when such might is flaunted before the country’s adversaries on numerous occasions, it would definitely make them angry.

However, he added, the enemies have populated the region with all sorts of military equipment, including aircraft carriers, submarines and vessels, requiring Iran to “take their presence seriously.”

The Islamic Republic keeps enemies' vessels under constant surveillance, and retains its preparedness for whatever scenario and situation, said the commander.

“We are watchful lest they commit a mistake and will respond to their whatever mistake decisively,” he said.

“Our approach today is not just defensive. We are prepared for whatever offensive operation [as well],” Khanzadi noted.