Thursday, 04 March 2021_It's a museum that according to Iranian officials is unique in the world. Different types of oil burning stuff, including heaters, stoves, ovens, lamps, etc. are on display in the museum on the outskirts of Kerman. It was officially launched on Tuesday in the presence of high-ranking provincial officials. 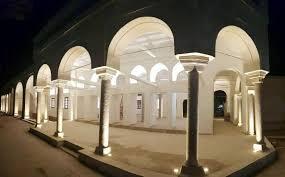 The venue was a famous garden in Kerman and later on, the British government used it as its consulate in the city. With the efforts of the Oil Ministry, the garden and the building inside was renovated to turn it into a museum to attract tourists and visitors.

The Iranian Oil Ministry is trying to launch a number of oil-related museums across the country to preserve the history of almost 120 years of oil production in Iran. The museum of oil burners is the fifth in the field of oil industry that is opened after those in Abadan, Tehran and Sabzevar.

All the stuff you see here are oil burners, and although they are not used anymore, they played a very significant role in everyday life of the people and it was somehow impossible to survive without them.