Over 200 Tunisians have taken to the streets of the capital, Tunis, to protest against Israel over the assassination of an aviation engineer with ties to the Gaza-based Palestinian resistance movement, Hamas. 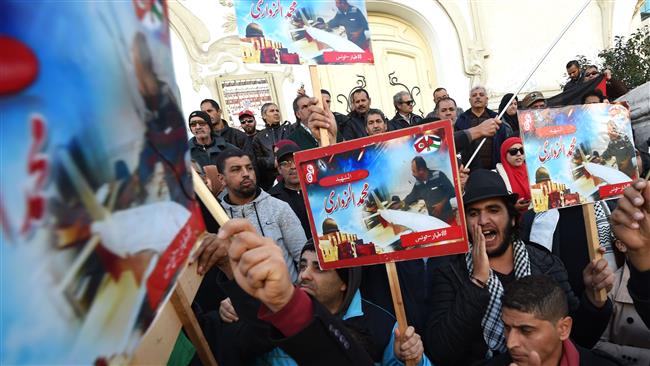 Holding Tunisian and Palestinian flags, demonstrators walked up a main thoroughfare in Tunis on Tuesday, chanting "With our soul, with our blood, we will avenge you Palestine.”

Mohamed Zaouari, a 49-year-old Tunisian national, was shot 20 times outside his house in the country’s port city, Sfax, on December 15.

Hamas’s al-Qassam Martyrs Brigade said Zaouari was killed by "Zionist treachery,” adding that the victim was a drone expert who had worked for the anti-Israeli resistance front for 10 years.
Protester Mohammad Ammar described Zaouari’s murder as "a loss not only for Tunisia but also for Palestine and the Arab nation.”

Tunisia's prosecution said 10 suspects, including a female journalist, had been detained for questioning over the incident.

Tunisian Interior Minister Hedi Madjoub said on Monday that the Israeli regime's involvement in the killing had not been ruled out.

Investigators have found that the killing was ordered by two foreigners and planned in Austria and Hungary in June, Madjoub added.

A foreign service was possibly involved, but there was not yet "any tangible proof,” the minister further noted.

The Tunisian parliament is expected to hold a special session over the killing in the coming days.

Back in 2012, Israel admitted to the 1988 assassination of Abu Jihad, the second-in-command of the Palestine Liberation Organization, in a raid on the movement's Tunis headquarters.
Share to
Related News
Austria urges EU to end Turkey's 30-yr bid to join bloc after referendum
Tags
Tunisians ، demonstrators ، Israel ، assassination ، Mohamed Zaouari
Your Comment