No results to come by a containment policy: Shafi’ee

Tehran, YJC. Member of the National Security Committee has said that major differences exist in the nuclear talks, making it difficult to reach an agreement. 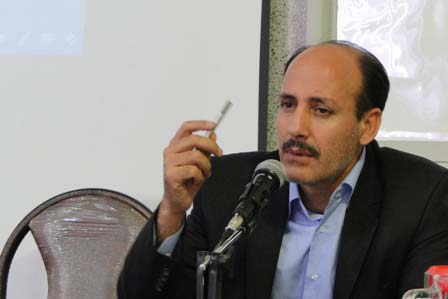 Nozar Shafi’ee said in an interview that despite optimistic views, an agreement in the near future is not possible.

"As long as the West is engaged in its policy of containment of Iran and enmity with the Islamic Republic it would be impossible for a result to be arrived at in the negotiations,” member of the National Security and Foreign Policy Committee of the Majlis said.

Nozar Shafi’ee also pointed to Catherine Ashton and Said Jalili’s talks in the wake of the Almaty II negotiations, saying "What could be made of their talks was that there exist major gaps in how the two sides look at the issue. Therefore much time is needed for the negotiations to produce any result.”

He also provided comments regarding previous optimistic views on the talks and asserted that despite the optimism, one cannot expect agreements to be made soon.

Shafi’ee then asserted "The reason why the talks take so long is that the nuclear part is only a small one of the many problems existing between Iran and 5+1.”

He also believed that beside the nuclear issue, the West has an eye also on the nature of the political ruling system of Iran. "Instead of engaging in techniques and tactics like negotiations, the West would better consider changing its policy,” he demanded.

He then pointed to Ashton as having said that sanctions are a tool for pressurizing Iran to bow down to the Six Powers and said "This shows that they are after what they want not what would be agreed upon by both sides.”