Takfiri Daesh terrorists in Syria have cut off the water supply from two pumping stations on the Euphrates to the east of the city of Aleppo, which was recently liberated from militants. 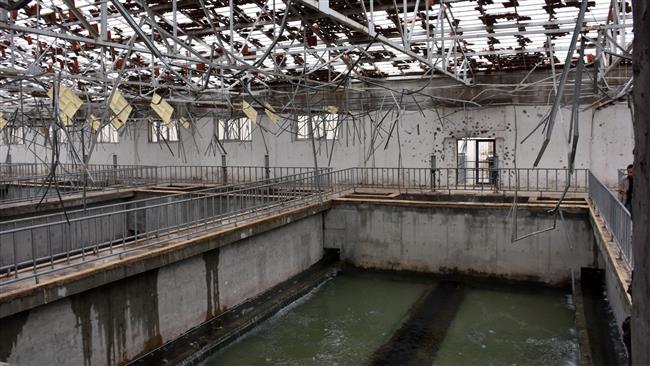 The blockage occurred on Friday, prompting Aleppo’s Water Organization, Syria’s Red Crescent Society, and local residents to look for ways to restore the water supply to the city.

Takfiri terrorist groups in Syria have resorted to cutting off water supplies to different residential areas in an apparent bid to retaliate battlefield losses.

On Thursday, the United Nations warned that four million people in the Syrian capital city of Damascus had been deprived of safe drinking water supplies for over a week after springs outside the city were deliberately contaminated by militants.

Water supplies from the Wadi Barada and Ain al-Fija springs to the northwest of Damascus, which served 70 percent of the population in the city, were cut after water facilities were deliberately targeted and damaged, the UN announced in a statement.

Syrian officials had earlier detected diesel contamination in the water piped to the capital and had cut supplies over safety concerns.

According to the UN, 15 million people across Syria are in need of help to access water and households spend nearly a quarter of their income on water.

In a separate development on Friday, the Syrian government forces found a cache of US-manufactured weapons worth of millions of dollars in eastern Aleppo, Russian media reported. The weapons had been sent to the Takfiri terrorists in hundreds of boxes disguised as humanitarian aid, the reports said.

An evacuation deal brokered by Russia and Turkey recently saw militants move from the east of the city — which had been held by armed groups for four years — to designated areas in the Idlib Governorate. As the evacuations were underway, the Syrian government said that trucks meant to deliver humanitarian aid to the area under the auspices of international organizations had to be inspected. Some of those organizations, however, denied inspections.

Last week, a Syrian army unit also discovered a major cache loaded with a considerable amount of munitions in an Aleppo neighborhood. The military later released footage of the weapons depot.

On Friday, the Syrian army announced a nationwide halt to fighting under a deal with the foreign-backed opposition. The ceasefire, also brokered by Russia and Turkey, does not apply to Daesh and Fateh al-Sham terrorist groups.

Over the past almost six years, Syria has been fighting foreign-sponsored militancy. UN Special Envoy for Syria Staffan de Mistura estimated in August that more than 400,000 people had been killed in the Syrian crisis until then. The UN has stopped its official casualty count in Syria, citing its inability to verify the figures it receives from various sources.
(Press TV)
Share to
Related News
UN chief: Blind measures not effective against terrorism
Tags
Daesh ، water supply ، Aleppo
Your Comment