Leader of the Islamic Revolution Ayatollah Seyyed Ali Khamenei said the enemy is seeking to destroy Iran’s “national power,” adding that authorities must work to strengthen the government’s executive and judicial branches in the face of such plots. 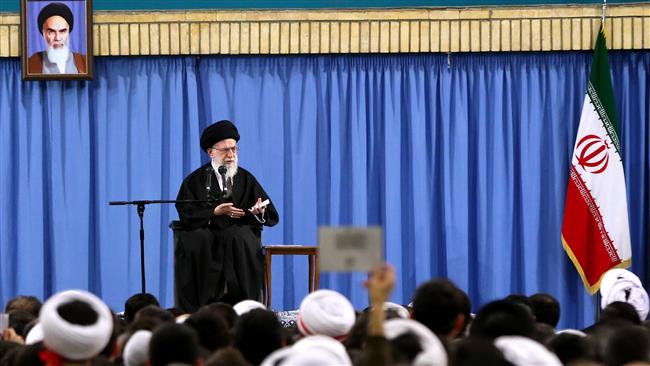 Ayatollah Khamenei made the remarks on Saturday in a meeting with thousands of people from the holy city of Qom, on the eve of the Uprising of January 9, 1978, against the despotism of the ruling monarchical authorities of the time.

The enemy "attacks the apparatuses that typify the country’s national authority,” the Leader said. "What would frustrate the enemy in its goals is for us to have a powerful judicial branch and a courageous and strategist government. These [qualities] should be reinforced.”

Elsewhere in his comments, Ayatollah Khamenei warned against schemes at work in British circles against the Islamic Republic and the entire region and said partitioning regional countries are among such plots.

"They say the era of a unified Iraq, a unified Syria, a unified Libya and a unified Yemen is over, but do not proceed to name Iran because they are afraid of Iran’s public opinion.”

By introducing bans, the enemy seeks to afflict people with economic woes, and thus separate the nation from the Islamic establishment, the Leader said, adding that even when the enemies lift the sanctions on paper, they make sure their afflictions will stay.

Ayatollah Khamenei further described "a powerful and resistant” economy as "the antidote” to the economic pressure against the country.

After consulting with the Expediency Council, Ayatollah Khamenei announced in February 2014 the general policies of the economic approach. 'Resistant Economy' is a long-term policy aimed at localizing development theories, shaping ones that are predicated on the Islamic economic model, and thus differ from those of the world’s predominant economic theories, namely liberalism and socialism.

Among elements of national power, the Leader said, were "faith and religious knowledge,” "scientific command” and "the preservation of national esteem.”

Ayatollah Khamenei described the 1979 Islamic Revolution as "the long leap” taken by the Iranian people towards liberation from dependence and backwardness.

"The overbearing bullies, who had once usurped the country and were driven out of it, and whose interests lie in the country’s dependence and remaining underdeveloped are now the Iranian nation’s implacable, blood enemies.”

Iran’s "archenemies,” the Leader named as "the US, Britain, international capitalists, Zionists and their followers.”

The Leader also warned against attempts by the United Kingdom to secure its goals in the region through its allies among the Persian Gulf kingdoms, adding that Britain  is also seeking restrictions and sanctions for the post-JCPOA era.

The JCPOA is an acronym for the 2015 nuclear agreement, known as the Joint

Comprehensive Plan of Action, between Iran and the P5+1 state – the US, the UK, Russia,
China, France and Germany.

"Is this not the enemy? Can one find an enemy more nefarious than this? Therefore, one should get to know the enemy and its ways.”