North Korea has barred Malaysian citizens from leaving the country, prompting Kuala Lumpur to quickly respond with a similar ban amid rising diplomatic tensions between the two sides over the assassination of the North Korean leader’s half-brother in Malaysia. 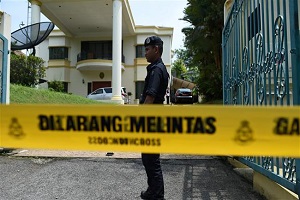 All Malaysian nationals in North Korea "will be temporarily prohibited from leaving the country until the incident that happened in Malaysia is properly solved,” the official Korean Central News Agency (KCNA) announced in a Tuesday report, citing the Foreign Ministry.

The latest row between Pyongyang and Kuala Lumpur – which have maintained strong relations for years – came following the killing of Kim Jong-nam last month by two women using a VX nerve agent at an airport in the Malaysian capital.

Malaysia has already charged the two women – an Indonesian and a Vietnamese – with murder. They face hanging if convicted.

Malaysia has not directly put the blame on North Korea for the assassination, but there is suspicion that Pyongyang had been behind the killing, an accusation strongly rejected by the North.

The Malaysian investigation into Kim’s death has also angered Pyongyang, which says the process is aimed at tarnishing its image. The diplomatic row has seen both sides declaring each other’s ambassadors as "persona non grata,” ordering them to leave.
"This abhorrent act, effectively holding our citizens hostage, is in total disregard of all international law and diplomatic norms,” the statement said.

In a tit-for-tat move, Najib said he has also instructed the police "to prevent all North Korean citizens in Malaysia from leaving the country until we are assured of the safety and security of all Malaysians in North Korea.”

The Malaysian ban seems to be focused on Pyongyang’s embassy in Kuala Lumpur, where police say two of the North Korean suspects sought for Kim’s murder are holed up.