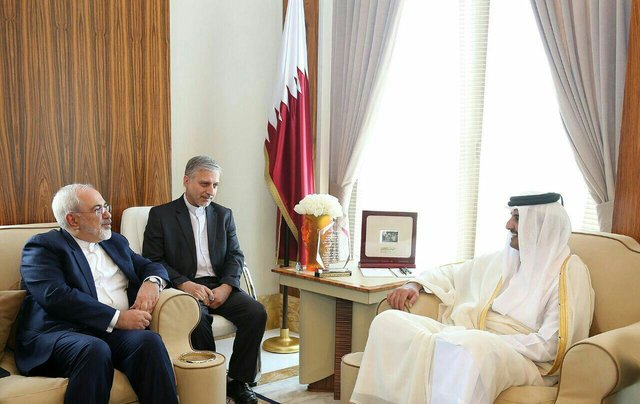 The two sides conferred on ways to expand and develop commercial and economic cooperation between Iran and Qatar as well as common concerns as they met in Doha.

Earlier in June, Iranian President Hassan Rouhani and Tamim Bin Hamad al-Thani in a phone conversation underscored the strategic relations between the two countries, and called for further enhancement of ties and cooperation.

During the phone talks, President Rouhani said the Islamic Republic of Iran and Qatar share many common grounds and goals and they can develop closer cooperation and hold regular consultations to reach their goals to serve the regional stability and development.

He underlined that international disputes should be solved through dialogue and cooperation of regional states.

President Rouhani said that the Islamic Republic of Iran is ready to hold consultations with such friendly states in the region as Qatar to promote regional security and stability.

"The Islamic Republic of Iran has always been seeking good and interest of regional states, hoping that through cooperation, the neighboring states will be able to strive for stability and tranquility of the region. Such an approach will guarantee interests of all the states," he added.

President Rouhani emphasized the need for strategic dialogue between Iran and regional states and wished Qatari government and nation success and prosperity.

Qatari Emir, for his part, said that Qatar honors sincere and very close relations with the Islamic Republic of Iran, hoping for growing ties.

He said that Qatar seeks good and strategic relations between Iran and the Persian Gulf southern littoral states.

Referring to Tehran-Doha strategic relations, the Qatari leader said that relations are getting developed and expanded away from influence or intervention of a third country.

Both Iran and Qatar have recently augmented efforts to further expand ties and cooperation in all the different political, economic, defense, security, judicial and cultural fields.