Two journalists sue Trump, US officials for being on ‘kill list’

TEHRAN, April 1, YJC -Two journalists have filed a lawsuit against the US government for being put on a "kill list" during the administration of former president Barack Obama, a list still being used by President Donald Trump's White House. 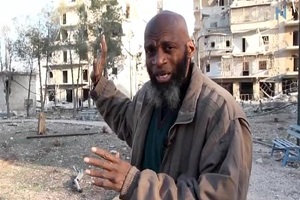 TEHRAN, Young Journalists Club (YJC) - The lawsuit was filed on behalf of the two men on Thursday in the US District Court of the District of Columbia by UK-based human rights group Reprieve and Washington DC-based law firm Lewis Baach.
Bilal Abdul Kareem, a US citizen who grew up in Mount Vernon, New York, and Ahmad Muaffaq Zaidan, a dual Pakistani-Syrian citizen who works for Al Jazeera, reject the accusation that they are members of militant organizations.
The complaint accuses the United States of conspiracy to commit murder outside its borders and violating international law on targeting civilians and asks the US to cease any planned strikes against the plaintiffs.
It asks the court to declare the journalists' inclusion on the list illegal, and issue an injunction removing their names until they can review the secret evidence against them.
The plaintiffs believe they are on the list based on documents from the National Security Agency (NSA) leaked by US whistle-blower Edward Snowden and published by The Intercept.
Abdul Kareem has been reporting from militant-held areas in northern Syria. He was also informed by a Turkish intelligence official that the US was seeking to kill him, according to court papers.
Zaidan, who served as Al Jazeera Arabic's bureau chief in Pakistan for several years, fled to Qatar, where Al Jazeera is based, according to the lawsuit.
"We know they're targeting Bilal and we've got to intimidate them enough, through publicity, to prevent them from doing this," said Clive Stafford Smith, Reprieve's founder and director.
"When you look at Ahmad Zaidan … we have a copy of their [US] leaked Power Point saying he's on the list. So that's pretty powerful," Stafford Smith said.
He said the case of Abdul Kareem is "even stronger," as Washington has allegedly targeted him several times before. "The reason we know that is that three of those strikes, at least, maybe more, were drones, and the only country that had weaponized drones at the time was the US."
The complaint has been filed against 12 defendants all believed to be involved in the US drone program, including Trump, the heads of the CIA, the Department of Defense, Department of Homeland Security and the Department of Justice.
The US carries out drone attacks in Pakistan, Afghanistan, Yemen and several other countries, claiming to be targeting al-Qaeda elements; but, local sources say civilians have been the main victims of the attacks.
Source:Press TV
Share to
Related News
Snowden’s Haven app turns smartphone into anti-spy sentinel
California gunman kills wife, self as she teaches class; student also dead
Flynn failed to disclose income from Russian entities: White House
Wealthy White House staffers' finances detailed in new disclosures
US’s own allies sponsoring terror, not Iran: Foreign Ministry
US must accept 'political reality' regarding Assad: White House
Hawaii judge extends order blocking Trump's Muslim ban
Anti-Palestinian Jewish attorney sworn in as US envoy to Israel
Tags
trump ، journalist ، lawsuit
Your Comment