TEHRAN, April 1, YJC -Iran’s Foreign Ministry has called on the United States to pressure its regional allies into abandoning their support for terrorism and not to level “malicious” allegations against the Islamic Republic. 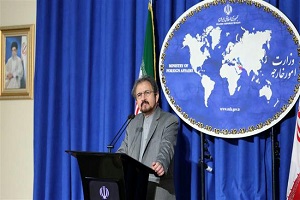 TEHRAN, Young Journalists Club (YJC) -Iranian Foreign Ministry Spokesman Bahram Qassemi made the remark on Saturday, reacting to earlier comments by US Defense Secretary James Mattis that Iran continued to sponsor terror.
"We urge the American official to — instead of making unwarranted and biased accusations against Iran — oblige some of the countries in the region that are friendly and close to the US and whose unwavering and widespread support for terrorist groups is clearly evident to halt their financial, ideological, and military support for these terrorist-Takfiri outfits,” he said.
Washington’s allies in the region, most notably Saudi Arabia, are accused of sponsoring terrorism — both materially and ideologically.
Takfirism, which is a characteristic of many terrorist groups operating in the region, is largely influenced by Wahhabism, the radical ideology dominating Saudi Arabia and freely preached by government-sanctioned Saudi clerics.
The Riyadh regime has also been a supporter of the violent militants operating in the conflict-ridden countries of Syria and Iraq.
During a press conference in London on Friday, Mattis had said that North Korea was the number-one threat to the US. He was then asked about his comments back in 2012, when he enumerated the three primary threats the US faced as being "Iran, Iran, Iran.”
"At the time when I spoke about Iran I was a commander of US central command and that (Iran) was the primary exporter of terrorism; frankly, it was the primary state sponsor of terrorism and it continues that kind of behavior today,” he said in the Friday remarks, trying to explain his apparent shift of opinion.
Qassemi, nevertheless, described Mattis’ new claim against Iran as baseless.
He said Iran believed that one main reason for the failure of the international efforts to combat terrorism was "giving the false address” when speaking about the financial and ideological sources of terrorism.
The Iranian Foreign Ministry spokesman said Iran had itself been a victim of terrorism and had been involved in non-stop efforts to fight the scourge.
Source:Press TV
Share to
Related News
Flynn failed to disclose income from Russian entities: White House
Wealthy White House staffers' finances detailed in new disclosures
Two journalists sue Trump, US officials for being on ‘kill list’
US must accept 'political reality' regarding Assad: White House
Tight security around US congress
Tags
ministry ، allies ، US
Your Comment