TEHRAN, April 1, YJC - Islamic Iranian Parliament Speaker Ali Larijani has slammed the “brazen and disruptive” US moves in the Middle East, saying Washington has ties with all terrorist currents. 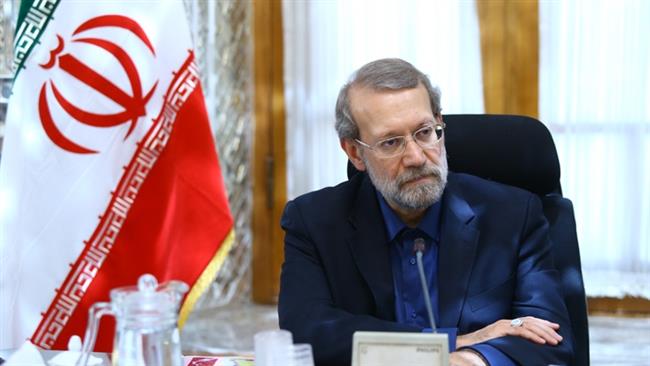 TEHRAN, Young Journalists Club (YJC) - "The US Army, Pentagon and CIA are sponsors of terrorists in the region and are disturbing peace in the Middle East on a large scale,” Larijani said on Saturday.
He added that Iranian lawmakers would thoroughly study this issue and make "important” decisions in this regard.
Larijani's comments come as some US representatives on Capitol Hill are reportedly pushing legislation that would direct the State Department to designate Iran’s Islamic Revolution Guards Corps (IRGC) as a terrorist organization.
This as a bipartisan group of US senators in Congress also on March 23 introduced a bill that would apply sanctions on the IRGC. Iran has vehemently dismissed allegations against the forces.
Elsewhere, Larijani said Iran has "thought out various ways" to respond to Washington's lack of commitment to its obligations under the landmark nuclear agreement, known as the Joint Comprehensive Plan of Action (JCPOA), signed between the Islamic Republic and the P5+1 group of countries in 2015.
He added that the "mischievous” acts would ultimately be detrimental to those who have failed to honor the agreement.
"On the nuclear issue, the Islamic Republic has pursued a clear approach and has a straightforward logic,” the top Iranian parliamentarian said.
Iran would "make life difficult” for the United States in case of a misconduct, he added.
He emphasized that Tehran has "fulfilled its promises to the best of its abilities" and would continue with this policy, but has also "foreseen various measures to counter their (US officials) plots and will execute them at the appropriate time and has no fear of their threats and the new US government.”
The JCPOA was signed between Iran and the five permanent members of the United Nations Security Council - the United States, France, Britain, Russia and China - plus Germany on July 14, 2015.
Under the JCPOA, Iran undertook to put limitations on its nuclear program in exchange for the removal of nuclear-related sanctions imposed against Tehran.
Since the implementation of the JCPOA, the IAEA, which is monitoring the technical implementation of the deal, has repeatedly confirmed Iran’s compliance with its obligations under the nuclear agreement in several reports.
Iran’s Foreign Minister Mohammad Javad Zarif warned on March 20 that Tehran is ready to restore its nuclear activities to the level it was before the JCPOA should Washington fail to keep its end of the nuclear bargain, Presstv reported.
Iran "is fully prepared to return to the pre-JCPOA situation or even [to conditions] more robust than that if the US reneges on its promises to the extent that the JCPOA’s continuation harms our national interests,” Zarif said.
The top Iranian diplomat’s remarks came on the same day that European Union foreign policy chief Federica Mogherini strongly defended the nuclear deal and said the IAEA has five times confirmed Iran’s compliance with its commitments under the JCPOA.