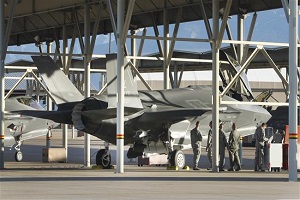 TEHRAN, Young Journalists Club (YJC)-Michael Gilmore, who was the Director of Test and Evaluation for the US military until recently, laid out in his parting report a long list of problems plaguing the $400 billion program in all departments from combat-readiness to the wing design, The Register reported Monday.
"The Services have designated 276 deficiencies in combat performance as ‘critical to correct’ in Block 3F, but less than half of the critical deficiencies were addressed with attempted corrections in 3FR6”, the report stated.
Gilmore warned that critical design flaws in the wings made it a hassle to fly the aircraft in speeds close to that of sound.
"All F-35 variants display objectionable or unacceptable flying qualities at transonic speeds, where aerodynamic forces on the aircraft are rapidly changing. Particularly, under elevated 'g' conditions, when wing loading causes the effects to be more pronounced, pilots have reported the flying qualities as 'unacceptable',” he stated.
According to Gilmore, the aircraft’s stealthiness  is undermined by a poorly designed Electro-Optical Targeting System. The system’s low resolution and range forces the pilot to blow his cover by making a close overflight before return to the safety zone, where they can launch their attack.
The F-35 has three variants: the A-model with conventional takeoff and landing which is the export version; the F-35B variant, which can handle short takeoffs and vertical landings for the Marine Corps and the British navy; and the F-35C, designed exclusively for the US Navy.
Another key flaw in Gilmore’s eye was the cap that conceals the F-35A’s gun and pulls the aircraft off-target upon opening due to a software glitch.
Add to this the aircraft’s limited storage for only a few hundred gun rounds, whereas older and less advanced fighter jets like the A-10 Warthog can carry more than 1,000 shells.
Gilmore went on to point out fatigue problems in the tail; excessively high air flow temperatures around the engine in the A and C variants; and the overheating of the horizontal tail at Mach 1.5 speed.
A technical problem forced the Air Force to ground its fleet of F-35s in September, only two months after declaring the aircraft combat-ready.
The US Defense Department expects to purchase 2,443 of the stealth warplanes over the next few decades.
Source:Press TV
Share to
Related News
Amid national pilot crisis, 1,000 retired US military pilots may be recalled
Window closing for Republican stealth assault on U.S. regulations
FBI photos show Pentagon during wake of 9/11
US should use ‘military means’ against Iran: CENTCOM chief
Pentagon chief asks for deeper military involvement in Yemen
Tags
scarcely ، pentagon ، tester
Your Comment