TEHRAN, April 4, YJC - The European Union’s Foreign Policy Chief Federica Mogherini said the bloc members will not move their embassies from Tel Aviv to Israeli-occupied Jerusalem al-Quds, which Palestinians want as the capital of their future state. 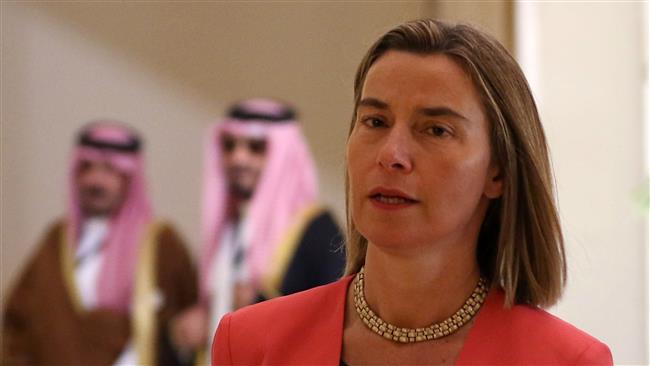 TEHRAN, Young Journalists Club (YJC) - "Our position is the same as the one of Arab League which is of the international community. EU and its member states will not move their embassies to Jerusalem and we discourage any kind of decision that goes in that direction,” Mogherini said Monday, according to the Kuwaiti state news agency KUNA.
She was speaking during a joint press conference with Egyptian Secretary General of the Arab League Ahmad Aboul-Gheit in Luxembourg.
"We share the same approach, that is a two-state solution, negotiations between the parties and in particular within the framework of the Arab Peace Initiative which we consider the most useful basis for advancing in this respect,” she further stated in reference to the long-running Israeli-Palestinian conflict.
The last round of negotiations between Israelis and Palestinians collapsed in 2014, and efforts have so far failed to revive the process.
The EU’s top diplomat also pointed out that she had participated in the 28th Arab League Summit in Jordan, highlighting "excellent cooperation” between the European bloc and the Arab League.
For his part, Aboul-Gheit stated that he intends to brief the EU Foreign Affairs Council about the resolutions passed during the Arab Summit in Jordan last week, while expressing the willingness of the Arab world to expand cooperation with the Western bloc.
The Arab League heads of state convened their annual summit in the northwestern Jordanian city of Sweimeh last Wednesday in a bid to address a range of issues, particularly regional conflicts.
The 22-member pan-Arab body reiterated its support for an independent Palestinian state, while censuring the Israeli regime for its continued settlement construction in the occupied territories.
Jordan’s King Abdullah II, who hosted the summit, said the creation of a Palestinian state remained the basis of any solution to the Israeli-Palestinian conflict.
In a final declaration issued at the end of its summit, the Arab League voiced opposition to any plan for the transfer of embassies from Tel Aviv to Jerusalem al-Quds, Presstv reported.
The declaration was apparently referring to plans by US President Donald Trump to move the American embassy from Tel Aviv to Jerusalem al-Quds.
The bloc had earlier warned the US against the plans, saying such a move would worsen the already-tense situation in the Middle East region.
Share to
Tags
EU ، Israel ، al-Quds ، Mogherini
Your Comment