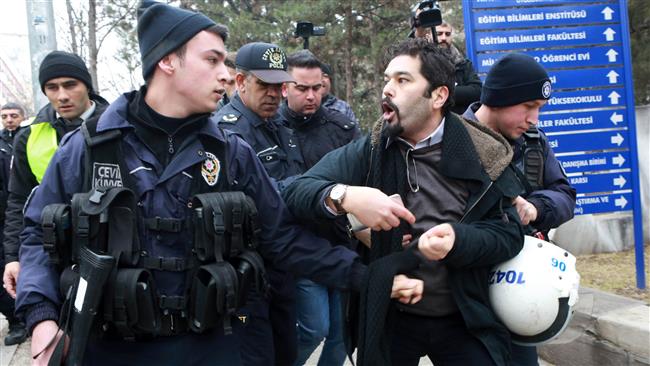 TEHRAN, Young Journalists Club (YJC) - The experts condemned the Turkish government’s dismissal of up to 134,000 public servants, including teachers, on suspicion of alleged links to banned organizations.
People’s basic rights must be respected even under an emergency rule, which should be restricted in a democratic society, they added.
"But there has been no attempt to show that these blanket measures, which have destroyed the careers and livelihoods of tens of thousands of persons, satisfy such criteria in each case," they warned.
The rights experts also noted that the closure of 200 media outlets had undermined the possibility of informed debate ahead of the April 16 referendum.
They further expressed concerns that the proposed constitutional changes would enable Turkish President Recep Tayyip Erdogan to unilaterally declare future states of emergency and associated measures.
The "sweeping" nature of the emergency decree "might be used in ways that exacerbate the existing major violations of economic, social, and cultural rights,” they pointed out.
Turkey witnessed a coup attempt on July 15, 2016, when a faction of the military declared that Erdogan’s administration was no more in charge of the country.
A few hours later, however, the putsch was suppressed. Almost 250 people were killed and nearly 2,200 others wounded in the abortive coup, which was blamed on the movement led by US-based opposition cleric Fethullah Gulen. He has denied the charges, Presstv reported.
Since then, Ankara has been engaged in suppressing the media and opposition groups, who were believed to have played a role in the failed putsch.
The crackdown has been made possible under a state of emergency imposed a few days after the abortive coup.
Separately on Thursday, Turkey’s Interior Ministry announced that a total of 543 terror suspects had been detained in just one week.
The ministry said 412 people were taken into custody in operations targeting the Kurdistan Workers’ Party (PKK) and Kurdistan Communities Union (KCK) that are viewed by Ankara as terrorist organizations.
It went on to say that 131 more people were detained over alleged links to the Daesh terrorist group.