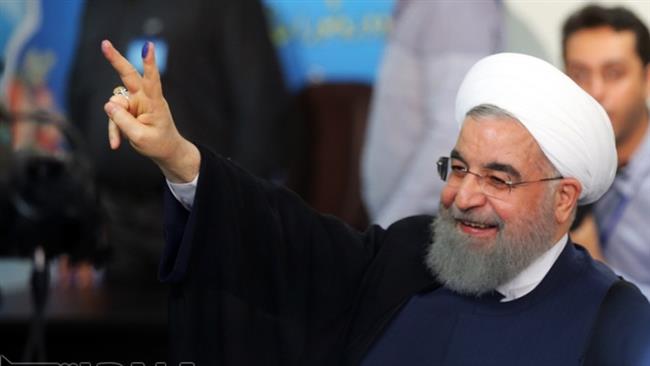 TEHRAN, Young Journalists Club (YJC) - Rouhani arrived at the Iranian Interior Ministry's Election Office on Friday.
The registration process for the May 19 presidential election began on Tuesday and is scheduled to close on Saturday.
Rouhani has been a member of the Assembly of Experts, the head of the Expediency Council's Center for Strategic Research, and a member of the Expediency Council.
He has also served as member of the Supreme National Security Council (SNSC). He has also served as the council’s secretary and Iran's chief nuclear negotiator.
Rouhani was a member of Iran's Parliament from 1980 to 2000, also serving as the deputy speaker of the parliament from 1992 to 2000.
He was elected as President of Iran on June 15, 2013 defeating Tehran mayor Mohammad Baqer Qalibaf and four other candidates. He took office on August 3, 2013.
Rouhani entered the 11th presidential contest with a slogan of "moderation” four years ago and succeeded in winning in the first round with some 50.88 percent of the vote.
'Promises kept'
Addressing reporters after putting his name down, Rouhani claimed to have fulfilled the pledges he gave the Iranian nation during his first term in office.
He added that the economic performance of the 11th Iranian administration set a new record, saying some projects valued at 20 billion dollars would be inaugurated in the port city of Assalouyeh in the southern Iranian province of Bushehr next week.
He noted that the value of Iran’s currency has been more stable in comparison with the Pound and Euro under the 11th administration.
He further pointed to the landmark 2015 nuclear agreement, known as the Joint Comprehensive Plan of Action (JCPOA), and emphasized that maintaining the deal is the most important duty for the Iranian nation.
Rouhani also said establishing a progressive and developed Iran would be the main goal of the next administration, adding that maintaining national security has been among the most important objectives of the 11th administration.
"Freedom, security and progress of the country will be the most important goals of 12th administration,” Rouhani said.
Share to
Tags
Rouhani ، election ، president
Your Comment