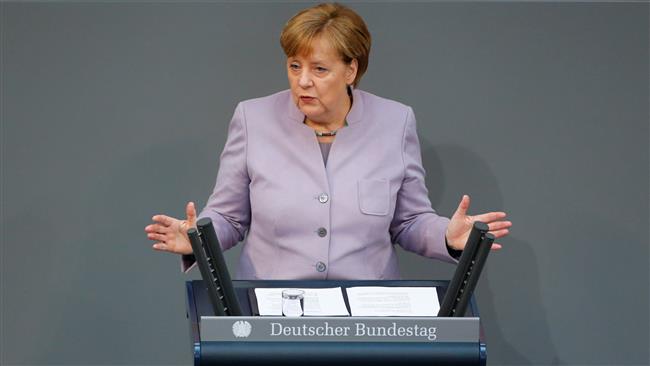 TEHRAN, Young Journalists Club (YJC) - "The developments over the past weeks have severely hit German-Turkish ties as well as European-Turkish relations," Merkel told the parliament in Berlin on Thursday.
She further accused Turkey of holding journalists without grounds, including Deniz Yucel, a Turkish-German national and reporter for Germany's Die Welt newspaper, who was taken into custody in February on charges of spreading "terrorist propaganda.” He is currently being held in solitary confinement.
The German chancellor said Ankara's arrest and treatment of the journalist was "incompatible with a constitutional state.”
‘Turkey referendum unfair’
Merkel further said that Turkey’s recent constitutional referendum, in which voters narrowly approved expanding Erdogan’s executive powers, was not held under fair conditions.
She also urged Ankara to respect civil rights in keeping with a constitutional state, saying it was "neither in Europe nor Turkey's interest" for either side to turn away from the other.
In the April 16 referendum, Erdogan's ‘Yes’ campaign won 51.36 percent of the votes, while the ‘No’ campaign gained 48.64 percent. Erdogan declared victory in the vote, but opponents said the referendum was deeply flawed.
Germany "will follow very closely how Turkey deals with the reports” by international election monitors about irregularities in the vote, Merkel said. The Turkish government "must answer the questions" raised, the German leader added.
Observers from the Organization for Security and Cooperation in Europe and the Council of Europe have described the referendum as "an uneven contest.”
The German chancellor stressed that she would use an upcoming summit with fellow EU leaders in the Belgian capital, Brussels, to discuss "which measures would be appropriate" for the bloc to take vis-a-vis Turkey.
Respect rule of law: NATO to Turkey
Separately on Thursday, the North Atlantic Treaty Organization (NATO), of which Turkey is a member, called on Ankara to respect due process amid mass arrests over last July’s abortive military putsch.
"Turkey has the right to protect itself and to prosecute those who were behind the failed coup attempt, but that has to take place based on the full respect for the rule of law," NATO Secretary General Jens Stoltenberg said.
The Ankara-EU ties soured following the coup attempt and Turkey’s subsequent crackdown on alleged conspirators, Presstv reported.
The row further deepened in March after several EU member states, notably Germany and the Netherlands, blocked Turkish ministers from holding rallies to secure a 'Yes' vote in the referendum, citing public safety concerns.
Erdogan accused the European countries of acting like "Nazis” and giving sanctuary to terrorists, who back Kurdish forces and last July's failed military coup.