TEHRAN, May 12, YJC - North Korea has denounced an alleged failed assassination attempt by the US and South Korean intelligence agencies against its leader Kim Jong-un as a “declaration of war.” 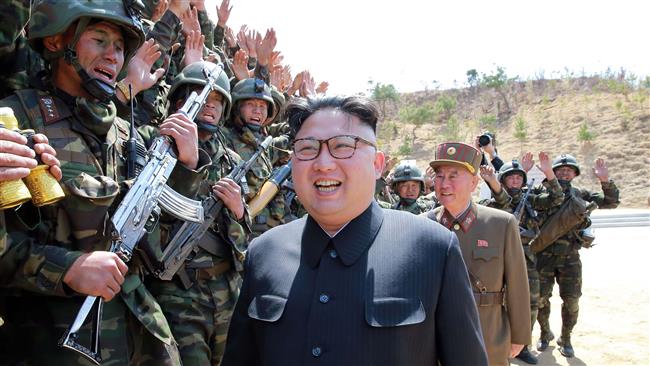 TEHRAN, Young Journalists Club (YJC) - The North Korean Permanent Mission to the United Nations, in a statement released on Thursday, said a "Korean-style anti-terrorist offensive will be commenced to mop up the intelligence and plot-breeding organizations of the two countries.”

The statement also revealed Pyongyang’s strong determination "to hunt down and mercilessly smash every single one of the terrorist maniacs of the CIA (Central Intelligence Agency) and the South Korean” intelligence service.
It noted that the plotters infiltrated a "terrorist” into South Korea, who had satellite communications equipment.
The statement urged all UN member states to support Pyongyang in its efforts.
The state-run Korean Central News Agency reported on May 8 that during public ceremonial events in Pyongyang marking the birth of North Korea’s founder Kim Il-Sung, the CIA and South Korea’s intelligence services had attempted to poison Kim with "biochemical substances.”
It also claimed that the CIA had paid $40,000 to a North Korean national to kill their leader.
Pyongyang’s head of intelligence, Ri Byong-ho, has stressed that the suspect behind the failed assassination is a "very important person," and that so far 80 attempts against Kim’s life have been thwarted.
The report came only a day after North Korea announced that it had detained another US citizen on charges of acting against its sovereignty. The arrest marked the fourth of its kind over the past few weeks.
Tensions have been on the rise on the Korean Peninsula over the past weeks. US President Donald Trump’s administration has repeatedly warned that "all options are on the table" regarding North Korea.
It has repeatedly threatened Kim with a military response to new tests of missiles and nuclear warheads, and sent warships and a nuclear submarine to Korean waters.
Trump even ordered two major attacks in Syria and Afghanistan last month, both of them viewed as stern warnings to the North.
North Korea, in response, has increased its missile tests and even hinted at a new nuclear test in the coming weeks. It has also warned the US and its regional allies like South Korea and Japan of a strong military response in case of any military operation.