TEHRAN, May 24, YJC -US Republican Senator Rand Paul is pushing for a vote on President Donald Trump’s recent $110 billion arms deal with Saudi Arabia, arguing that it would make Washington complicit in the Riyadh regime’s ongoing war crimes in Yemen. 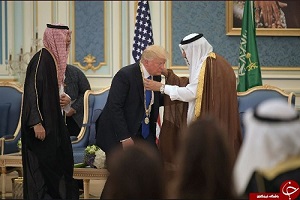 TEHRAN, Young Journalists Club (YJC) -Paul, who ran against Trump in last year’s presidential race, was expected to introduce the measure on Wednesday, according to his aide.
The Kentucky lawmaker is hoping for a vote in early June. The Arms Export Control Act allows Paul to bring up the measure in the Senate after 10 calendar days.
Trump signed the $110 billion deal during the first leg of his maiden overseas trip in Saudi Arabia over the weekend.
Reportedly brokered by the Republican president’s son-in-law Jared Kushner, the massive package includes American missiles, bombs, armored personnel carriers, Littoral Combat Ships, terminal high altitude area defense (THAAD) missile systems and munitions.
"That was a tremendous day,” Trump said Saturday, after signing the deal. "Hundreds of billions of dollars of investments into the United States and jobs, jobs, jobs.”
Unnamed administration officials say the deal might grow in size to more than $300 billion over the next decade.
Human rights advocacy groups have blasted Trump for pushing ahead with the arms sale without considering Saudi Arabia’s unprovoked war against Yemen, which has killed thousands of Yemeni civilians since its onset in March 2015.
The US has been openly providing logistics and intelligence support to Saudis ever since.
This is not Paul’s first attempt to scuttle a major arms deal with the Riyadh regime on the same grounds.
In September, the Senate voted 71-27 against a joint effort by Paul and Democratic Senator Chris Murphy to block another military deal with Saudi Arabia worth of $1.15 billion, signed by Trump’s predecessor Barack Obama.
"Saudi Arabia is an unreliable ally with a poor human rights record. We should not rush to sell them advanced arms and promote an arms race in the Middle East," Paul said in August last year, when the deal was first authorized.
Source:Press TV
Share to
Related News
US approves $15bn THAAD missile system sale to Saudi Arabia
Trump defends Kushner, slams 'fake news'
Trump son-in-law had undisclosed contacts with Russian envoy
Trump meets with Pope Francis in Vatican
Americans ask: Why is Saudi monarchy our friend, but not democratic Iran?
Trump arrives in Italy to meet Pope Francis amid protests
Tags
rand paul ، trump ، senate
Your Comment