TEHRAN, May 27, YJC -The leader of Yemen’s Houthi Ansarullah movement says Saudi Arabia seeks to split the Muslim Ummah — the Muslim people as a whole — and to turn them into indecisive people who can be exploited. 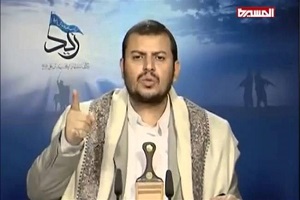 TEHRAN, Young Journalists Club (YJC) -Abdul Malik Badreddin al-Houthi made the remarks in a Saturday message to the Yemeni public, in which he also felicitated them on the occasion of the start of the Muslim fasting month of Ramadan, Yemen’s al-Ahd news agency reported.
He said Saudi Arabia was the leading regime among the "regional hypocrites, which only seek destruction and sedition to execute American and Zionist plots.”
The recent visit to Saudi Arabia by United States President Donald Trump — during which Washington agreed to sell Riyadh 110 billion dollars worth of arms — was likewise to the benefit of the Israeli regime, Houthi said.
Houthi urged Yemenis to strengthen their faith in order to confront the challenges facing them, especially the plots of the "Saudi-American invaders.”
Saudi Arabia has been waging war on Yemen since 2015 to restore a former president who was friendly to Riyadh. The invasion, in which the US also provides assistance to Saudi Arabia, has killed thousands of civilians.
The Houthi leader urged the mercenaries fighting on behalf of Saudi Arabia to mend their ways. He invited them to exchange all the hostages they were holding with the prisoners held by the Houthis during Ramadan.
Source:Press TV
Share to
Related News
Houthi fighters kill Saudi captain during clashes in southern Yemen
Saudi Arabia blatantly subservient to US: Yemeni leader
Only Iran, Syria helped Lebanon when it was occupied by Israel
5 civilians killed in US raid on Yemen: Rights group
US attack kills 7 in central Yemen: Pentagon
Tags
saudi ، yemen ، houti
Your Comment