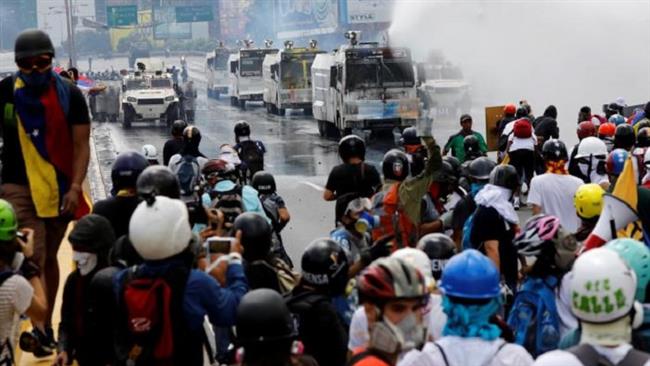 TEHRAN, Young Journalists Club (YJC) - Riot police fired water cannons and tear gas canisters to disperse masked crowds of young protesters, who threw Molotov cocktails and stones at police officers in return, in the Venezuelan capital, Caracas, on Wednesday.
The clashes mainly erupted when demonstrators marched into Caracas’ main highway in an attempt to reach the Foreign Ministry building but National Guard soldiers blocked their way and pushed them back with volleys of gas and shots of water.
"It’s always the same. We set off peacefully and they attack us. We have to respond; we’re human beings,” said a 20-year-old law student.
The fresh wave of unrest came as foreign ministers from the 34-nation Organization of American States (OAS) unsuccessfully met in the US capital, Washington D.C., in a third bid to find a solution to the ongoing crisis in Venezuela.
As right-leaning nations, like Brazil, mounted pressure on embattled Maduro, 54, to give his citizens their "fundamental freedoms,” left-leaning countries like Nicaragua rejected such endeavors as meddling in the internal affairs of Venezuela and "subverting the rights” of a sovereign country.
The wave of unrest initially erupted in early April, when Venezuela’s Supreme Court decided to assume the powers of the opposition-controlled parliament in violation of the country’s constitution.
Although the decision was later revoked, protesters continued to take to the streets across the country against the president, who is now convening a constituent assembly to write a new constitution, much to the chagrin of the protesters.
The Venezuelan opposition, which demands an early presidential election, has refused to participate in the assembly and called the plan "fraudulent.”
The opposition and its supporters blame Maduro for the crisis, demanding elections, the freedom of jailed activists, and permits for the entry of foreign aid.
The left-wing government, however, says the protests are incited by the United States to remove the president from power.
An opposition leader at the march on Tuesday, Miguel Pizarro, said they would not give up despite the government’s attempts to quell the movement.
Oil-rich Venezuela is struggling with a soaring inflation and shortages of food and medicine.