TEHRAN, June 3, YJC - Saturday marked the second day of anti-government protests in Kabul days after a massive truck bomb attack hit the most secure part of the capital and left 90 people dead. 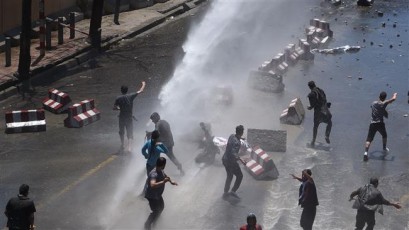 TEHRAN, Young Journalists Club (YJC) -  Saturday marked the second day of anti-government protests in Kabul days after a massive truck bomb attack hit the most secure part of the capital and left 90 people dead.
On Friday, over a thousand protesters rallied to call for the resignation of President Ashraf Ghani for failing to ensure security in the capital.
The demonstrators argued that their leaders were not capable of leading the country following months of instability across the nation.
The rally, however, turned deadly as a confrontation broke out between protesters and police, who fired into the air to drive back crowds trying to cross security cordons and reach the presidential palace.
Afghan security forces use water canons to disperse protesters during clashes at a protest against the government in Kabul on June 2, 2017. (Photo by AFP)
At least eight people were reportedly killed and over a dozen wounded in the gunfire.
A group of the protesters remained at the site of the blast, setting up tents there overnight on Friday.
However, security officials in Kabul banned anti-government protests on Saturday, citing the risk of attacks on large gatherings of people.
Reports said streets in large parts of the city had been closed, with armed checkpoints set up and armored vehicles patrolling the area.
The Wednesday attack, claimed by the Daesh Takfiri terrorist group and the deadliest in Kabul since 2001, hit the city’s most secure district, which is home to the presidential palace and foreign embassies.
Source: Press TV
Share to
Tags
Afghan authorities ، Kabul ، blast ، protest clashes
Your Comment