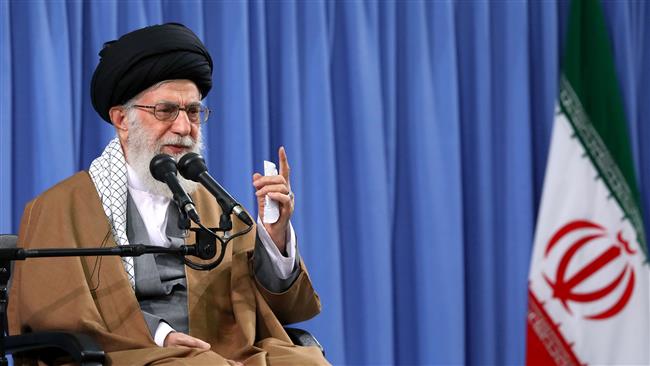 TEHRAN, Young Journalists Club (YJC) - Ayatollah Khamenei made the remarks when addressing a ceremony held to mark the 38th passing of founder of the Islamic Republic, Imam Khomeini.

"If something that is true is not repeated with all details and specifications, it may be gradually distorted. Most of you know that there are motivations for distorting the personality of the Imam and distorting the revolution, which was the greatest feat of the honorable Imam,” the Leader added.

The Leader said the secret of the success of Imam Khomeini’s movement was that he managed to bring the youth and all people into the arena and keep them there.

Ayatollah Khamenei noted that Imam Khomeini’s ideas, including freedom, social and economic justice, and encouraging the nation to get rid of US domination were among major factors, which attracted the Iranian youth to the revolution.

The Leader stated that as a result of Imam’s ideas, young people even in those countries that are subservient to the United States, like Saudi Arabia, cherish the idea that their country must be freed from US domination.

Ayatollah Khamenei went on to note that the Islamic Revolution, which was led by Imam Khomeini, was not merely change of government and its goal was not merely to oust one group from power and replace it with another group.

The Leader said previous movements in Iran had failed because they sought to achieve a minimum level of goals, but Imam’s movement pursued maximum goals and succeeded.

Ayatollah Khamenei further stated that Iranians experienced a "decisive, very important and sensitive” era in the 1980s, describing the decade as seeing "the most violent terrorism” which targeted the Iranian nation.
"During those years, thousands of the Iranian people were martyred by terrorists. The 1980s is the decade of the [Iraqi] imposed war,” the Leader stated.
During this decade, the Leader added, the toughest sanctions were imposed on the country in all areas, including on Iran’s financial bodies.
Ayatollah Khamenei said the Iranian nation, particularly the youth, managed to resist and overcame all problems during that period.
The enemies have so far failed to deal major blows to Iranians, who have succeeded in making progress and carrying out great tasks, the Leader said.
The Leader stated that Imam Khomeini had described the US as the "Great Satan and an unreliable state,” adding that the heads of European countries have confessed that no one can trust Washington, which attests to truth of Imam Khomeini's ideas.
"This is wisdom. The Americans are unreliable with respect to all issues,” Ayatollah Khamenei pointed out.
'Al Saud will never defeat Yemen; Bahrain intervention illogical'
In another part of his address, the Leader expressed regret that Muslims in some countries, including Yemen, Syria, Bahrain and Libya, were facing numerous problems even in the holy fasting month of Ramadan.
"The Saudi government is bombarding Yemen day and night and exerting pressure on Yemen. Definitely, this is a mistake,” Ayatollah Khamenei said.
"The Saudi government must know that if it proceeds with such an approach even for the next 10 or 20 years, it will fail to achieve a victory against the Yemeni people. This is a crime against the innocent people and will bear no fruit.”
The Leader also condemned the "illogical” presence of Saudi Arabia in Bahrain and said the Bahraini government must engage in negotiations with the people of the country.
Ayatollah Khamenei criticized acts of intervention by a foreign country and Riyadh's policymaking in Bahrain, saying such moves were "irrational and unwise” and would create problems for nations.
It is wrong and inefficient to impose one's own will on a nation, the Leader said, adding that this policy would never yield a result "even if it is accompanied by hundreds of billions of dollars in US bribes.”
Ayatollah Khamenei further criticized the wrongful presence of foreign countries in Syria contrary to the will of its government and nation, stressing, "The Syrian issues must be solved through dialogue.”
The Leader warned that enemies were waging "proxy wars” in Syria, Bahrain and Yemen as well as other parts of the Muslim world.
'High turnout in election shows Iranians’ trust in Islamic establishment'
Ayatollah Khamenei also hailed the massive participation of the Iranian people in the presidential election late last month, saying it showed public trust in the Islamic establishment.
The Leader pointed to the Guardian Council’s confirmation of the result of the May 30 presidential election in spite of some reports about irregularities in the electoral activities and called on officials to closely examine such cases to prevent their repetition in future elections.
Ayatollah Khamenei called on all Iranians, regardless of the election result, to show forbearance.
Elsewhere, the Leader urged all Iranian officials to reinforce their unity and solidarity in dealing with international developments.
Ayatollah Khamenei also called on the Iranian administration to prioritize production and the creation of job opportunities and fulfill the pledges it made during the presidential campaign.