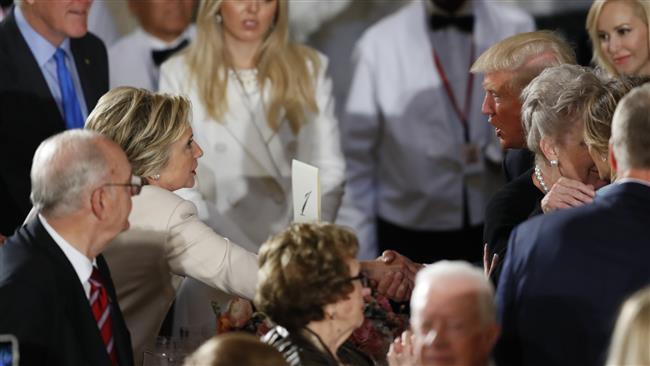 TEHRAN, Young Journalists Club (YJC) - Major figures within the party are fed up with the justifications Clinton has been making over the past weeks for her historic loss to Republican Donald Trump in the November 8 presidential vote, The Hill reported Monday.
Citing interviews with dozens of Democrats, the report noted that Clinton’s return to politics was largely viewed as an attempt to appear as the leader of the "anger movement” within the party, while what it did in reality was making her look bitter about her defeat.
One long-time Clinton aide specifically objected to her speech at the Recode conference in California on Wednesday, where she blamed the Democratic National Convention (DNC) for her defeat.
"To go out there publicly again and again and talk about it? And then blame the DNC?” the aide wondered. "It's not helpful to Democrats. It's not helpful to the country, and I don't think it's helpful to her.”
Clinton said at the conference that she had inherited nothing from the party, claiming that it was "bankrupt” after an eight-year run under the leadership former President Barack Obama.
"If she is trying to come across as the leader of the angry movement of what happened in 2016, then she's achieving it,” a former senior aide to Obama said. "But part of the problem she had was she didn't have a vision for the Democratic Party, and she needs to now take a break and let others come to the forefront.”
Clinton’s comments are specially hurtful for Democrats, who have been dealing with a leadership crisis since losing both Congress and presidential elections to Republicans.
While Obama has largely stayed out of the spotlight despite slight reappearances here and there, other major figures like Vermont Senator and one-time Clinton rival Bernie Sanders have been making some efforts to put the party back together.
New DNC chief Tom Perez has also failed to make an impression after winning a bitter leadership battle against Representative Keith Ellison of Minnesota.
Jamal Simmons, a Democratic strategist, said even if Clinton wanted to address her defeat "it would be nice to hear a little more about the things she did wrong.”
Source: Press TV
Share to
Tags
Democrats ، Hillary Clinton ، blame game
Your Comment