Thousands of Slovaks protest against corruption

TEHRAN, June 6, YJC - Thousands of people have taken to the streets in Slovakia in protest against alleged corruption in Prime Minister Robert Fico’s government, calling for the resignation of a number of officials. 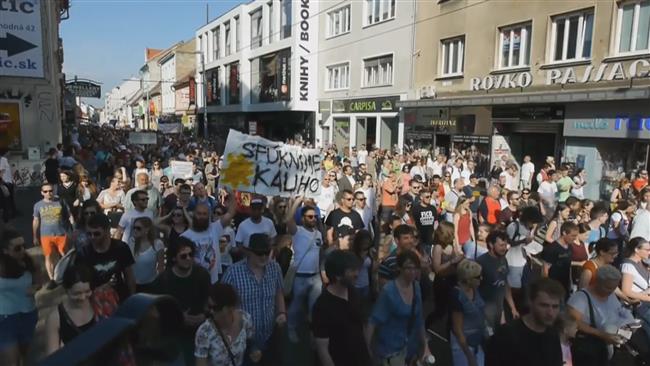 TEHRAN, Young Journalists Club (YJC) - The protesters are demanding the resignation of Interior Minister Robert Kalinak for purported deals with a controversial businessman, and police chief Tibor Gaspar and other officials they allege have prevented proper investigations of corruption scandals.
Monday’s rallies in Bratislava and Kosice follow a demonstration in April, which was the biggest protest in Slovakia since 2012, when a file documenting possible bribery and allegedly compiled by the country's spy agency appeared online.
The file, known as "Gorilla,” suggested that a financial group had bribed government and opposition politicians to win lucrative privatization deals.
The protesters also are calling for the full investigation of the "Gorilla” case, Presstv reported.
President Andrej Kiska has been supporting the student-organized demonstrations.