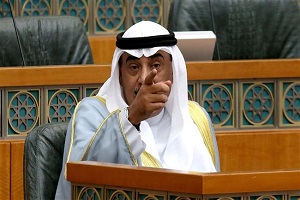 TEHRAN, Young Journalists Club (YJC) -Over the past week, Kuwait has been playing the role of mediator between Qatar and Saudi Arabia, Bahrain, Egypt and the United Arab Emirates who broke off relations with Doha and suspended all land, air and sea traffic with the monarchy. In their apparent bid to secure US support and that of Israel, the four countries cited Qatar's links with Hamas and accused it of supporting terrorism.
"(Kuwait) affirms the readiness of the brothers in Qatar to understand the reality of the qualms and concerns of their brothers and to heed the noble endeavors to enhance security and stability," said Kuwaiti Foreign Minister Sheikh Sabah al-Khalid al-Sabah on Sunday.
"The state of Kuwait will not abandon its efforts and will continue its good will efforts to patch the rift and find a solution that will deal with the root cause of the causes of the dispute... in the brotherly relations," he added. "Kuwait stresses the inevitability of solving this disagreement within the Persian Gulf framework," he added. He went on to tell reporters that his country will carry on mediating between the two sides until their differences are resolved.
Last week, Kuwait’s emir traveled to Qatar after his visits to Saudi Arabia and the United Arab Emirates (UAE) as part of his efforts to help mediate a solution to the diplomatic row among Arab countries.
Bahrain freezes Qatar bank accounts
Meanwhile, Bahrain’s central bank has issued orders freezing assets and bank accounts of Qatar-linked entities.
"The central bank issued a directive to all the financial institutions licensed in the kingdom of Bahrain to freeze accounts, cash, deposits, investments, insurance policies and all the financial transactions of the individuals and entities that were on the terrorism list," read a statement released by the central bank.
It also ordered the banks to provide any further information about the individuals to the government.

Earlier, Qatar's Foreign Minister Sheikh Mohammed bin Abdulrahman Al Thani stressed that his country is keen to have "positive” ties with Iran amid the ongoing row with neighbors.

He also noted that Arab nations consider Gaza-based Hamas a "legitimate resistance movement" and not a "terrorist organization as viewed by the US.”

Also on Sunday, Iran’s national carrier Iran Air sent five planes of food to Qatar as the diplomatic crisis is hitting food imports into the small Persian Gulf state amid a Saudi-led blockade.

Qatar has a history of diplomatic disputes with other Persian Gulf Arab countries. In 2014, Saudi Arabia, the UAE, and Bahrain temporarily recalled their ambassadors from Doha over what they said to be Qatar’s support for Muslim Brotherhood.