TEHRAN, June 12, YJC - Iranian researchers at a science-based company in Qazvin Province, central Iran have managed to build aerogel, world’s lightest solid material, for the first time in the country. 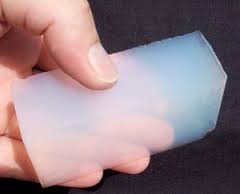 TEHRAN, Young Journalists Club (YJC) - Over 95 percent of the material is made of air. It was first used in astronauts’ costume by NASA to keep them from moisture and heat.
The holes in aerogel make it the best thermal insulation in the world. The material can tolerate 1600 °C temperature, while the Armerican model can only tolerate 650 °C one.
The Iranian product is also used as electricity and sound insulation and is compatible with the environment and does not produce smoke in case it is melted.
Iran has now managed to get access to the hi-tech material know-how and in industrial scale, it is the word’s second country making the product.
The product costs one fourths of the foreign one and can be used as infrared ray insulation as well.
Iran is able to produce 100 liters of the material per month, hoping to increase the volume to 100.000 liters per year by summer 2018.