TEHRAN, June 12, YJC - The head of the International Atomic Energy Agency (IAEA) says the agency continues to verify Iran's fulfillment of its commitments under the landmark nuclear agreement it signed with the P5+1 group of countries in 2015. 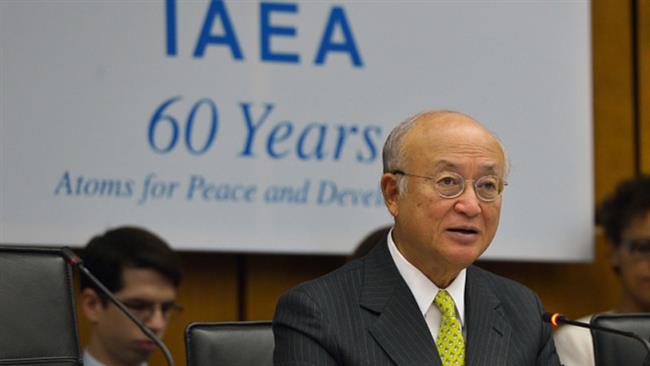 TEHRAN, Young Journalists Club (YJC) - "The Agency continues to verify the non-diversion of nuclear material declared by Iran under its Safeguards Agreement,” IAEA Director General Yukiya Amano said in an introductory statement to the Board of Governors in Vienna on Monday.
He added that he had sent his report on Verification and monitoring in the Islamic Republic of Iran in light of United Nations Security Council Resolution 2231 (2015) to the 35-member Board of Governors.
"The Agency is verifying and monitoring Iran’s implementation of all its nuclear-related commitments under the Joint Comprehensive Plan of Action, in accordance with the modalities set out in the JCPOA, consistent with the Agency’s standard safeguards practices, and in an impartial and objective manner,” the UN nuclear agency’s chief said.
He added that the agency would continue its evaluations regarding the absence of
undeclared nuclear material and activities in Iran.
Iran and the five permanent members of the United Nations Security Council – the United States, France, Britain, Russia and China – plus Germany signed the mammoth agreement in July 2015 and started implementing it in January 2016.
Under the JCPOA, Iran undertook to put limitations on its nuclear program in exchange for the removal of nuclear-related sanctions imposed against Tehran.
In its latest report on June 2, the IAEA confirmed that Iran had lived up to its commitments under the JCPOA, adding that the country’s stock of low-enriched uranium as of May 27 was 79.8 kilograms, well below the agreed limit of 300 kilograms.
The IAEA report, the second since the January inauguration of US President Donald Trump, was sent to the member states amid increasing tensions between Tehran and Washington. Trump has called the nuclear agreement "the worst deal ever negotiated” and vowed to "dismantle” the "disastrous” deal.
Arak heavy water reactor's name changed: AEOI
In another development, Behrouz Kamalvandi, the spokesman of the Atomic Energy Organization of Iran (AEOI), said on Monday that the name of the Arak heavy water nuclear reactor in central Iran had been changed to Khondab research reactor.
He added that the move had been carried out with the purpose of making it possible for the facility to continue producing heavy water as per IAEA's documents.
Without elaborating, the AEOI spokesman said the change of the reactor’s name had not been demanded by any country, including the US.
The 40-megawatt Arak reactor is intended to produce isotopes for cancer and other medical treatments. Iran is redesigning the planned research reactor to sharply cut its potential output of plutonium.
Iran removed the sensitive core of the reactor in January 2016 and UN inspectors have visited the site to verify the move, which is crucial to the implementation of the JCPOA.
Share to
Related News
Top US general says Iran complying with nuclear deal
Iran slams Zionist experts access to advanced countries’ N. facilities
Tags
Iran ، IAEA ، nuclear
Your Comment