Iranian people impervious to outside attempts to decide their destiny: Zarif

TEHRAN, June 16, YJC - Iran's Foreign Minister Mohammad Javad Zarif says the Iranian nation will not allow attempts made outside the country to decide the destiny of their country. 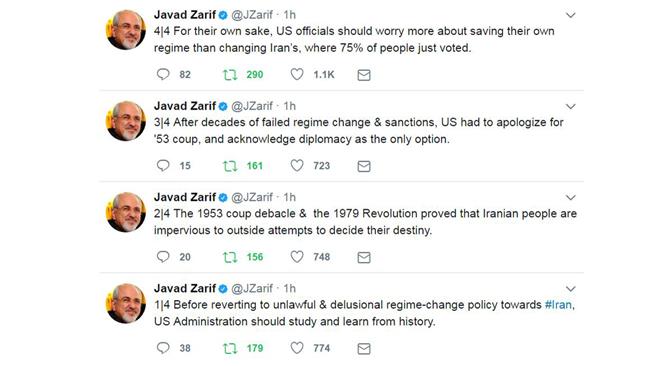 TEHRAN, Young Journalists Club (YJC) -Referring to recent remarks by his US counterpart, Rex Tillerson, on Thursday, Zarif posted on his Twitter account saying, "The 1953 coup debacle & the 1979 Revolution proved that Iranian people are impervious to outside attempts to decide their destiny.”
Iran's foreign minister was alluding to a US-led coup d’état staged in Iran on August 19, 1953, which toppled the government of then Iranian prime minister, Mohammad Mosaddeq, and restored the former Shah of Iran to the throne despite widespread dissatisfaction with monarchy among the Iranian nation.
Speaking at a US House Committee on Foreign Affairs hearing on Wednesday, Tillerson said the Iranian government "continues activities and interventions that destabilize the Middle East.”
Asked whether the United States supported regime change in Iran, the American top diplomat said US policy was driven by relying on "elements inside of Iran” to bring about "peaceful transition of that government.”
"Our policy towards Iran is to push back on this hegemony, contain their ability to develop obviously nuclear weapons, and to work toward support of those elements inside of Iran that would lead to a peaceful transition of that government. Those elements are there, certainly as we know,” he said.
Responding to Tillerson’s allegations, Zarif wrote on his Twitter account that "before reverting to unlawful & delusional regime-change policy towards #Iran, US Administration should study and learn from history.”
"After decades of failed regime change & sanctions, US had to apologize for '53 coup, and acknowledge diplomacy as the only option,” he added.
Zarif then made a direct reference to the recent presidential election in Iran, which was marked with a high voter turnout that has been construed by analysts as a sign of high legitimacy of the Islamic establishment among the Iranian nation, as opposed to low voter turnout in presidential polls held in the United States and most Western countries.
Zarif said, "For their own sake, US officials should worry more about saving their own regime than changing Iran’s, where 75% of people just voted.”
Earlier on Thursday Iran's Foreign Ministry condemned Tillerson's hostile remarks on the Islamic Republic, refuting his accusations that Iran had "aspirations of hegemony in the region," saying the remarks violated international law.
The ministry’s spokesman, Bahram Qassemi, noted that the top US diplomat’s remarks were "interventionist, in gross violation of the compelling rules of international law, unacceptable and strongly condemned.”
Qassemi cited a history of US "meddling in Iran in different forms" since the 1950s, saying the policy has only brought about "defeat and global shame” for Washington.
"Confusion, vulnerability to false insinuations and escape from reality are among the distinctive features of the new American government's foreign policy,” he added.
Over the past years, the Iranian government and nation have demonstrated that they would stand up to protect "the sovereignty of the country, the government and ideals with unity, prudence, rationality and wisdom,” Qassemi added.