US, Qatar, Israel rejoice at appointment of new Saudi heir

US President Donald Trump has called Saudi Arabia’s new crown prince to congratulate him. TEHRAN, June 22, YJC - According to a White House statement released Wednesday, the president and Crown Prince Mohamed bin Salman spoke on the phone “to advance our shared goals of security, stability, and prosperity across the Middle East and beyond.” 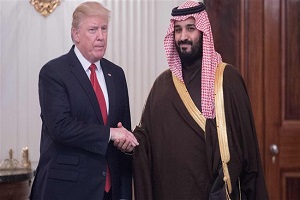 Trump also spoke with the king-in-waiting about the dispute with Qatar as well as their so-called war on terrorism.

"The two leaders discussed the priority of cutting off all support for terrorists and extremists, as well as how to resolve the ongoing dispute with Qatar. They discussed efforts to achieve a lasting peace between the Israelis and the Palestinians," the White House said in a statement after the call.

Saudi Arabia, Bahrain, Egypt and the United Arab Emirates cut their diplomatic and economic ties with Qatar earlier this month, accusing Doha of supporting terrorism, an allegation rejected by the Qatari government.

The Israeli regime also signaled that it welcomes the move with Communications Minister Ayoub Kara, asserting that it “means more economic cooperation in the Middle East, and not just regarding oil.”

“The strengthening of relations with the Trump administration is the beginning of a new and optimistic time between Saudi Arabia and regional states, including Israel and the Jewish people,” Kara (pictured above) said in a statement.

Mohammed bin Salman's promotion, though expected, came as a surprise since the monarchy is engaged in a row with Qatar, while actively escalating tensions with Iran.

According to the decree, Mohammed bin Salman becomes the deputy prime minister, while retaining his military and other portfolios.

Apart from his role in the Saudi energy policy and economic initiatives to build a future for the monarchy after oil, Mohammed bin Salman is leading the Saudi war on impoverished Yemen.

The civilian fatalities caused by the invasion have been put at more than 12,000 so far.

Trump recently signed an arms deal worth $110 billion with the Saudis, despite warnings he could be accused of being complicit in the regime’s war crimes in neighboring Yemen and its support for terrorism.