TEHRAN, Aug 1, YJC -Saudi forces have set fire to the homes belonging to Shia residents in the besieged town of Awamiyah that has been the scene of a heavy-handed regime crackdown on the minority community. 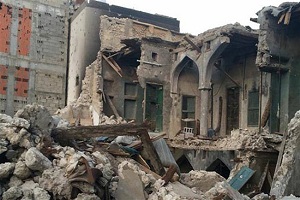 TEHRAN, Young Journalists Club (YJC)-Local reports said that the Saudi forces had thrown the Awamiyah Shia citizens out of their homes and then torched their properties.

Awamiyah, situated in the Eastern Province, has long been a flashpoint between the Saudi kingdom and the inhabitants complaining of discrimination.

It has witnessed renewed deadly clashes between the Saudi military and residents since May, when Riyadh’s forces began razing the town’s old quarter, known as al-Mosara.

Saudi authorities claim that Mosara’s narrow streets have become a hideout for militants suspected of being behind attacks on security forces in Eastern Province.

Karima Bennounce, the UN special rapporteur in the field of cultural rights, said Saudi authorities ignored repeated pleas by the world body to halt the destruction operation.
“These destructions erase the traces of this historic and lived cultural heritage and are clear violations of Saudi Arabia’s obligations under international human rights law,” Bennoure said, accusing the Saudi forces of “irreparably burning down" historic buildings and forcing residents to flee their homes.

Additionally, Ali al-Dubisi, the head of the Berlin-based European Saudi Organization for Human Rights, said the Saudi forces were following a scorched-land policy in Awamiyah, launching rocket attacks and shelling residential buildings and civilians who are resisting Saudi pressures to evacuate.

Since February 2011, Saudi Arabia has stepped up security measures in Shia-dominated Eastern Province, which has been rocked by anti-regime demonstrations, with protesters demanding free speech, the release of political prisoners, and an end to economic and religious discrimination.

The government has suppressed pro-democracy movements, but they have intensified since January 2016 when Saudi Arabia executed respected Shia cleric Sheikh Nimr al-Nimr.