TEHRAN, Aug 1, YJC -US President Donald Trump's approval rating has dropped to a new low, according to a pollster which is Trump’s favorite because it has consistently given him better marks than other polls. 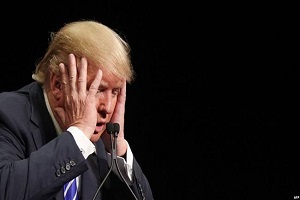 TEHRAN, Young Journalists Club (YJC)-According to Rasmussen Reports, a firm often criticized for being very right-leaning, Trump’s approval rating had dipped below 40 percent for the first time ever on Monday in a Rasmussen poll.

The poll showed Trump with a disapproval rating of 61 percent, and pegged his approval at an all-time low of 39 percent.

The Rasmussen poll interviewed 1,500 likely voters, and had a margin of error of 2.5 percentage points.

Trump’s approval rating has been sliding downward over the past couple of weeks before it reached 39 percent on Monday, according to Fran Coombs, the managing editor of Rasmussen Reports.

Coombs said Trump’s new low number is likely a combination of the "unsettled nature" of Trump's staff and Congress’s failure to pass an Obamacare repeal bill.

Most other pollsters had found Trump's approval fell below 40 percent long ago.

An ABC News/Washington Post poll, released in mid-July, showed Trump’s six-month approval rating was the lowest of any president in polls in 70 years.

The poll surveyed people's opinion about Trump’s competence on the world stage, his effectiveness, the GOP healthcare plan as well as his handling of Russia’s alleged role in the 2016 election.

Only 36 percent of Americans approve of Trump’s job performance, down 6 points from his 100-day mark, which itself was a low.

The previous president, whose approval rating was very close to this level at or near six months, was Gerald Ford, who received 39 percent in February 1975.