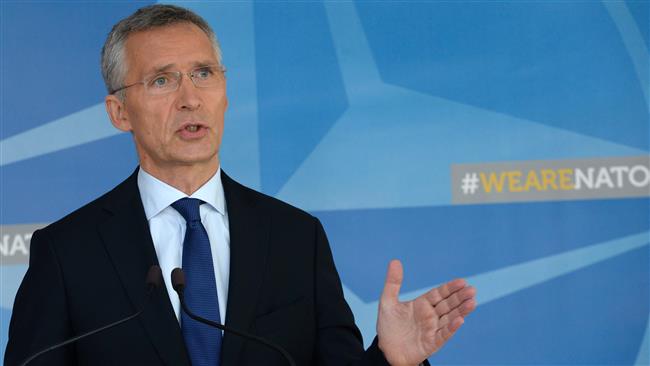 TEHRAN, Young Journalists Club (YJC) - “I think [it] is correct to say that NATO’s relationship with Russia is more difficult than it has been any time since the end of the Cold War,” Stoltenberg told CNN on Thursday, suggesting that the strain in relations had been due to Russia’s “destabilization” of Ukraine.

Eastern Ukraine has been the site of a conflict since 2014, when the government in Kiev started a crackdown on pro-Russia protests in the country. That same year, the then-Ukrainian Crimean Peninsula voted in a referendum to separate from Ukraine and join the Russian Federation. Western countries have branded that unification as an “annexation” of the territory by Russia, and Ukraine soon confronted pro-Russia protests elsewhere, in its eastern Donbass region, with a heavy hand.

The crisis soon turned into an armed conflict. Western countries have blamed Russia, which denies any involvement.

Stoltenberg said, “At the end of the Cold War, we hoped to develop a close partnership with Russia. But especially after the illegal annexation of Crimea in 2014 and the continued Russian destabilization of eastern Ukraine, the relationship between NATO and Russia has deteriorated considerably.”

The NATO secretary general’s claim about trying to forge partnership with Russia came as the Western military bloc — originally founded to contain Russia following the Second World War — has been vexing Moscow all along by engaging in military activity near Russian borders. While such activity has increased since the Ukrainian conflict erupted, it was by no means been a feature of the recent past only.

NATO has also been attempting to co-opt countries near Russia, a move that together with the military activities is considered as a serious provocation by Moscow.

But Stoltenberg also claimed that NATO was committed to avoiding a further spike in tensions and was pursuing a twin-track approach of “defense deterrence and dialog.”

“As long as we are strong, as long as we are predictable, we can also engage in political dialog with Russia to try to avoid escalation and avoid a new Cold War,” he said.

Just on Wednesday, US Vice President Mike Pence suggested in a visit to Montenegro that Russia was seeking to take over territory from countries in Eastern Europe.

“As you all know, Russia continues to seek to redraw international borders by force and, here in the Western Balkans,” Pence told a summit attended by leaders of NATO members Montenegro, Croatia, Albania, and Slovenia, as well as Serbia, Bosnia, Macedonia, and Kosovo, Presstv reported.

A day later, the Russian Foreign Ministry said the US was practicing the “primitive ideology of the Cold War era” by making the defamatory statements against Russia.

The US and the former Soviet Union emerged as the world’s only superpowers following the defeat of Nazi Germany in World War II, and, up until the collapse of the Soviet Union in 1991, they engaged in a geopolitical and military competition that came to be known as the Cold War.