TEHRAN, August 4, YJC - Saudi military bulldozers have almost razed Awamiyah to the ground amid the deadly crackdown on the besieged Shia town, forcing hundreds of its residents to flee or hand over their personal property to the authorities. 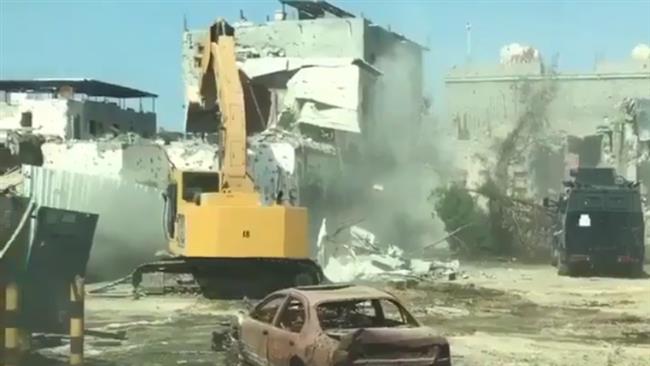 TEHRAN, Young Journalists Club (YJC) - The Middle East Eye news portal cited activists as saying that authorities have resorted to compulsory evictions in and around the historic al-Mosara district of Awamyiah.

The residents, according to the activists, have been driven out of their homes, while their property has been confiscated by private development firms.

The report also published an image showing a requisition order pinned to a house in the district of al-Shweikah, close to al-Mosara, which was issued by a private company with the authorization of the so-called National Joint Counterterrorism Command (NJCC).

Reports coming out of the town say Saudi military forces have been firing randomly at homes and cars in Awamiyah, destroying or setting fire to several houses and shops.

Amateur videos circulating on the Internet shows the city has been reduced to rubble, with activists saying those left inside are suffering from a lack of electricity, water, rubbish collection or fire services.

“There is a plan for forced displacement,” said Ameen Nemer, a Saudi activist originally from Awamiya. “It doesn’t matter where these people will end up.”
Awamiyah, located in the eastern Qatif region, has been under military lockdown since May, when Saudi troops began destroying al-Mosara.

Riyadh claims al-Mosara has become a hideout for “militants,” who are behind attacks on security forces in Eastern Province, but locals and the United Nations say the regime is after erasing cultural heritage in the Shia town and redeveloping the area.

Some eight people have been killed by the Saudi military in the town over the past days.
On Wednesday, Saudi police opened fire on a bus transporting people who were trying to flee the town, killing a civilian.

Nemer further said the regime is pursuing a politically-motivated project to depopulate and destroy the Shia town.

Since 2011, Eastern Province has been the scene of anti-regime demonstrations, with the protesters calling for freedom of speech, the release of political prisoners, and an end to economic and religious discrimination exercise by authorities.