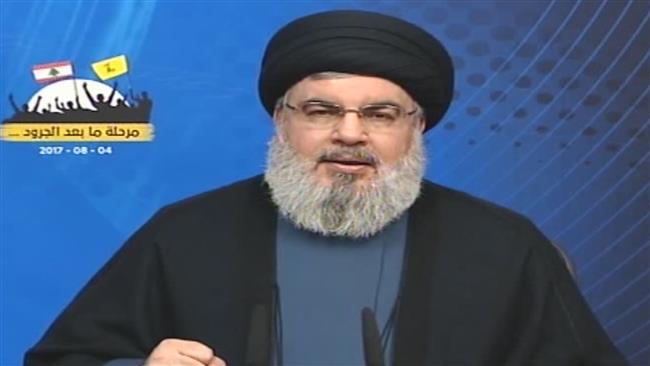 TEHRAN, Young Journalists Club (YJC) -He was delivering a televised speech on the occasion of the purge of the town of Arsal on the border with Syria of al-Qaeda-linked Nusra Front terrorists.

In a statement on Thursday, the Lebanese resistance movement said its fighters had regained control over all areas in Arsal, which lies about 124 kilometers northeast of Beirut.

“I congratulate everyone on this major victory,” especially fighters who made it possible, Nasrallah said.

He said the fighters were backed by the Syrian army, adding that the next phase of the battle will take on the Daesh Takfiri group in the border areas between Lebanon and Syria.

Sending a clear warning to Daesh, the Hezbollah chief said that "for the fist time" there is "national consensus" among the Lebanese nation that the terrorists' annihilation is "imminent."

He also thanked Iran for its advisory support in the battle for Arsal.
Hezbollah fighters and the Syrian army recently launched an offensive to drive out militants from their last stronghold in the border area between Lebanon and Syria.

The militants of al-Nusra Front, now known as Fateh al-Sham, withdrew following a series of consecutive defeats that forced them to agree to a ceasefire.

Under the truce deal, the Syrian government will shuttle the militants and their families to Idlib province and some other areas.

About 7,000 militants and members of their families left Arsal on Wednesday.

The Hezbollah chief hailed the role Damascus played in negotiations with militants and thanked the Syrian leadership for its efforts that helped strike the deal and release captives. Nasrallah said the United Nations and the International Committee of the Red Cross (ICRC) played no role in the Arsal operation.

He also underlined that “all liberated areas” would be handed over to the Lebanese army.