TEHRAN, August 6, YJC -One of Germany’s two major political parties has rejected pressure by the United States to increase the European powerhouse’s defense spending in line with membership rules in the NATO military alliance. 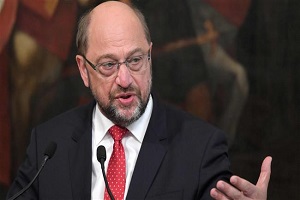 TEHRAN, Young Journalists Club (YJC) -Two leaders with the Social Democratic Party of Germany (SPD), Martin Schulz and Thomas Oppermann, said in a joint article in the Funke Mediengruppe newspaper on Sunday that Germany should not bow to pressure to raise its defense spending to two percent of its gross domestic product (GDP).

“We say a clear no to the ‘two-percent target’ of [US President Donald] Trump and the CDU/CSU,” they said, referring to the Christian Democrat Union of German Chancellor Angela Merkel and its Bavarian sister party.

“It’s not only non-realistic, it is simply the wrong goal,” added Schulz and Oppermann.

Schulz is the leader of the SPD and plans to challenge long-time Chancellor Merkel in upcoming national elections next month. Oppermann heads the SPD in parliament.

The two politicians also blasted Merkel for what they said was submissive behavior toward Trump regarding the defense spending target.

“Merkel and the CDU/CSU make themselves small vis-à-vis Donald Trump when they answer his provocations around the two-percent target by saying, ‘Okay, fine, we’ll put in more money,’” they wrote.
Schulz and Oppermann argued in the article that in order to meet the target, Germany would have to nearly double its current military budget, which they said would make German military the largest in Europe.

That was something “no one could want,” they said, given Germany’s infamous Nazi history.

General elections will be held in Germany on September 24 to elect the members of the 19th Bundestag. The SPD is lagging behind Merkel’s Christian Democrats in the polls by 15 percentage points but believes it has a fighting chance.

Schulz, a former president of the European Parliament, has previously described Trump as a “risk to the whole world” and “far worse” than expected.

He has told German media that he would do better than Merkel as chancellor in defending Germany, the EU, and the world against Trump’s “merciless nepotism.”