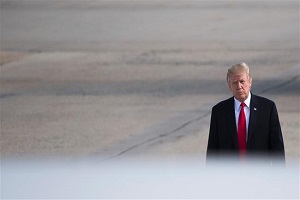 TEHRAN, Young Journalists Club (YJC) - “Every day that goes by, we are paying a price in America for Donald Trump’s reckless and irresponsible behavior with the Russians and that needs to come to come to an end and it needs to happen quickly,” Warren said at a town hall meeting in Revere, Massachusetts, Friday.

Democrats have alleged that Trump colluded with Russia during his election campaign for the 2016 US presidential race and Moscow helped him in defeating Hillary Clinton, Trump’s Democratic rival.

Trump, however, has strongly rejected the accusations, describing them as "total fabrication."

"We didn't win because of Russia. We won because of you," Trump said Thursday at a campaign-style rally in Huntington, West Virginia.

"The reason why Democrats only talk about the totally made-up Russia story is because they have no message, no agenda, and no vision," he said.

A sweeping federal probe is underway to investigate whether officials in Trump’s election campaign coordinated with Russia to help the Republican president defeat Clinton in last year’s election.

'I am not running for president’
At her town hall meeting on Friday, Warren also dismissed speculation that she could run for the White House against Trump in next election, saying she instead is focusing how to push back against his agenda.

“We can’t just play this game of once every four years and getting focused there. We need to focus on the fights in front of us," she said. "I’m doing my job every single day. I am not running for president, I’m doing my work.”

Speculation has swirled for months that Warren, an outspoken critic of Trump’s divisive policies, is planning to take on him in 2020.

The Massachusetts senator has earlier said that Trump failed to deliver on his promise to help working-class people, accusing him of delivering “a gut punch to America's working people.”

She has said Trump vowed to make working-class people his top priority, but instead he assembled a team of billionaires and bankers at the White House which is working against the middle-class.