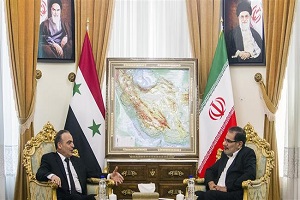 Referring to high civilian death toll in Raqqah, Shamkhani said the US air raids amounted to genocide, with American warplanes using banned weapons and ammunition in their attacks.

He said the US aerial assaults were a brazen example of human rights violation and proved Washington’s lack of commitment to principles of human rights.

The strikes, however, have on many occasions resulted in civilian casualties and failed to fulfill their declared aim of countering terrorism.
Elsewhere in his remarks, Shamkhani stressed that the Islamic Republic will continue to stand by Syria and keep up its support for the nation until the crisis is over in the Middle Eastern state.

“Instead of fighting terrorist elements, Western countries and the US take suspicious measures in line with strengthening terrorism and worsening insecurity in the region,” he said, warning that the harmful effects of such moves “will lead to the spread of terrorism in the world.”

The Iranian official further emphasized that peace will be restored to the region and consequently the European countries, shortly after the West ends its financial, technical and weaponry support to terrorists.

The Syrian premier, for his part, briefed Shamkhani on the latest developments and achievements in the country in its battle against terrorism and the political settlement of the conflict.

He also thanked Tehran for backing the Syrian people and government. He said the return of security to Syria depended on some countries stopping their support for terrorists.

Last week, Damascus wrote to the United Nations, calling for the dissolution of a US-led coalition which has been bombing the country for years.

In two letters addressed to UN Secretary General Antonio Guterres and the world body’s Security Council, the Syrian Ministry of Foreign Affairs and Expatriates complained that the coalition “continues to commit massacres against Syrian innocent civilians through conducting systematic airstrikes.”

The ministry further said that the US-led strikes were meant to support terrorist groups operating in Syria which has been grappling with a foreign-sponsored militancy since March 2011.