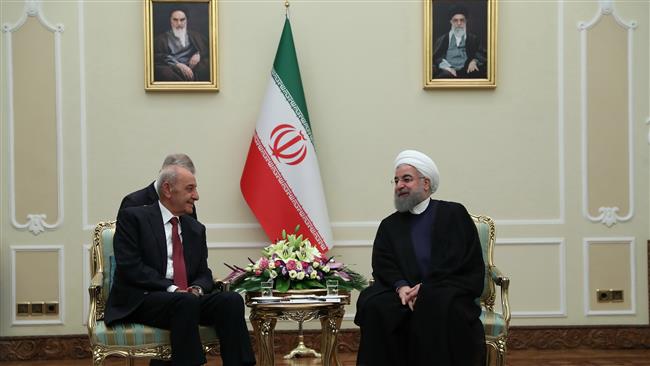 TEHRAN, Young Journalists Club (YJC) - In a meeting with Lebanon’s Parliament Speaker Nabih Berri in Tehran on Sunday, Rouhani added that the Islamic Republic would always stand by the Lebanese government, nation and the resistance movement.

He hailed the recent victories made by the Lebanese people against the Zionists and terrorists and said the Arab nation has managed to repel such threats through resistance.

He added that unity among Shia and Sunni Muslims as well as Christians in Lebanon can serve as a good model for the reinforcement of unity and coherence in other countries.

The Iranian president also said Tehran and Beirut have always enjoyed cordial and friendly relations and stressed the importance of further strengthening of cooperation in all fields.

The Lebanese parliament speaker, for his part, said Iran is a powerful country in the region and cannot be isolated.

Berri, who has traveled to Tehran to attend the swearing-in ceremony of President Rouhani, added that high turnout of the Iranian nation in the recent presidential election displayed the Islamic Republic’s power to the world, particularly the US.

Terrorists likely seek to spread out in region: Rouhani

Meanwhile, in a meeting with Armenian President Serzh Sargsyan, Rouhani warned that the terrorists are likely to seek to spread out in the region after their complete defeat in Syria and Iraq.

He said all countries must remain vigilant in the face of the spread of terrorism in the region, particularly in the Caucasus and Central Asia.

The Iranian president urged all regional countries to boost close cooperation to counter such a dangerous phenomenon.

He also emphasized that the Islamic Republic seeks to expand relations with its neighboring states, including Armenia, and said Tehran and Yerevan can take positive steps to serve their bilateral and regional interests given their numerous cultural and historical commonalities.

Sargsyan, for his part, said Iran and Armenia have the potential to bolster cooperation in economic, energy, trade and transportation sectors.