TEHRAN, August 9, YJC - Letter from 160 civil society groups says UN has allowed too much interference from countries such as Turkey and Russia 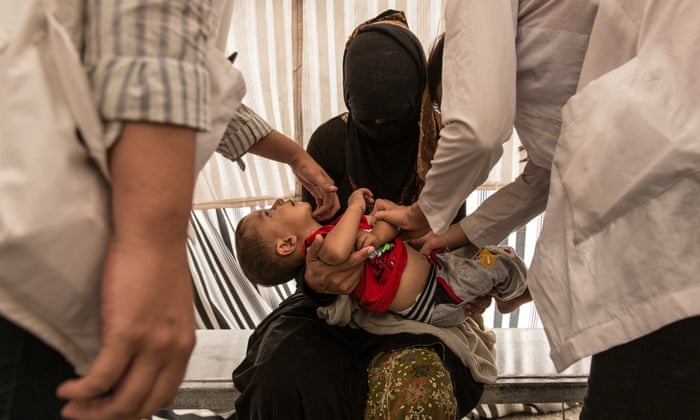 A young mother has her child checked by NGO doctors at a camp in Raqqa, Syria. Photograph: Chris Huby/Le Pictorium/Barcroft

TEHRAN, Young Journalists Club (YJC) - The UN-brokered Syrian peace talks are failing due to external interference and can only be rescued by refocusing on the issue of political transition, a coalition of 160 Syrian civil society groups has said in an open letter to the UN’s special envoy.

The letter to Staffan de Mistura reveals a deep frustration that the UN has allowed the peace process to be hijacked by regional players with their own agendas.

“The time consumed on discussions around process and representation, at the expense of a credible and realistic political deal for transition towards democracy, is not only wasting precious time but it is also undermining the international community’s efforts to fight terrorism in Syria,” the letter says.

De Mistura has led seven rounds of discussions in Geneva, but in recent months they have become bogged down by attempts by Turkey, Russia and the Gulf States to shape the process. The most recent round of talks made virtually no progress.

The letter is understood to be specially aimed at Russian interference. Many civil society groups feel that the UN negotiating team has succumbed to the Russian agenda because it views the Russians as the dominant political and military force on the ground.

De Mistura’s critics claim he has been too willing to adjust the process to suit the demands of external actors, leaving central issues such as humanitarian protection, detainee releases and political transition on the back burner.

“Many members of civil society are troubled by some international actors’ attempts to dictate who sits around the negotiation table,” the letter says. “For the Geneva process to be truly inclusive and Syrian-led it must serve the Syrian people’s aspirations first and foremost for a transition towards a democratic and free Syria. Allowing the priorities and direction of the process to be shaped by international actors has only weakened the process and diverted it from its central function.”

Asserting the civil groups’ relevance to the talks, the letter says: “Syrian civil society activities are essential in the fight against extremism. Moderate voices – as we represent – have the power to push back against the extremist forces and fill the vacuum on the ground. But to be able to do so, we need the international community to protect our ability to assist and serve our people.

“We are keen to reverse this trend as without the support of Syrian civil society no political deal will be either sustainable or legitimate, and right now the current process is losing our support. Syrian civil society’s priority is to achieve an inclusive transition to a free and democratic Syria.”

The letter calls on the UN to ensure that the Geneva process serves the interests of the Syrian people and is not driven by international actors. “This requires a re-focus of the Geneva talks on to transition in line with UN security council resolutions,” the letter says.

The international community, including the UN security council’s five permanent members, have confirmed that political transition is the principal aim of the Geneva process.

A total withdrawal of support for the UN by civil society groups would probably result in some of the key negotiators in the opposition team pulling out, giving the process even less credibility.

On Thursday Russia announced the establishment of a “de-escalation” zone in northern parts of Homs province. Russia and Iran, both supporters of the Syrian president, Bashar al-Assad, and Turkey, which backs rebels fighting Syrian government forces, agreed on a plan in May to establish four “de-escalation” zones across the country.