TEHRAN, August 11, YJC - Iran’s media report that Russia’s Elbin Bank has signed an agreement to invest as much as $100 million in the development of a spa town in northern Iran. 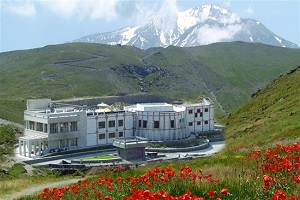 TEHRAN, Young Journalists Club (YJC) -The agreement was signed in Moscow between the bank and a representative of a housing cooperative in Iran’s northwestern province of Ardabil.

Officials from Elbin Bank were quoted by the agency as saying that a delegation would be sent to Iran in the near future to prepare the grounds for the development of what would be named as Taysiz Health Town.

Another agreement that the Iranian delegation from Ardabil signed in Moscow concerned cooperation in selling handicraft of the province in Russia.

The agreement would also envisage selling food products produced by units under the auspicious of the Welfare Organization of Iran.

These, IRNA added, would be carried out over a period of three years and the Elbin Bank would be responsible for providing the related banking mechanisms.

Sareyn is located around 28 kilometers from Ardabil, the capital city of Iran’s northwestern province of Ardabil. It is famous national and internationally for its hot springs that are situated near an inactive volcano in mount Sabalan. The water in Sareyn springs contains a significant amount of sulphur particles which are believed to be good for bone and joint pains.

Ardabil and its surrounding cities are also known for a wide variety of handicraft including carpets and rugs as well as honey.