TEHRAN, August 12, YJC -The United States and North Korea have been warned against escalating rhetoric and making threats against one another. 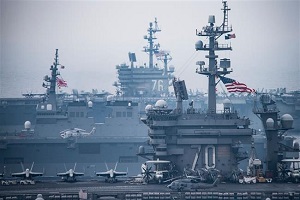 TEHRAN, Young Journalists Club (YJC) - China, Russia and Germany were the countries that expressed concern about the status quo.

Chinese Foreign Ministry spokesman Geng Shuang called on both sides on Friday to avoid "going down the old path of alternately showing strength and continuously escalating the situation."

The spokesman said the sides should try to tone down their fiery rhetoric and say things to de-escalate tensions as international concerns grow that the two could start a devastating conflict.

"We call on the relevant parties to be cautious with their words and actions, and contribute more toward easing tensions and enhancing mutual trust," Geng said in a statement.

German Chancellor Angela Merkel said she saw no military solution to North Korea crisis. The escalating rhetoric, she stated, was a "wrong answer" to the North Korea problem.

Tensions over North Korea escalated in July, when Pyongyang twice successfully tested an intercontinental ballistic missile (ICBM) capable of targeting the US mainland.
China has repeatedly said peace on the Korean Peninsula lies in a diplomatic solution.

Beijing says the resumption of six-party talks between the two Koreas, the United States, Russia, China and Japan is the road to peace.

However, China’s position has been overshadowed by constant threats from US President Donald Trump and North Korea’s reactions to them.

Trump issued a new threat against North Korea on Friday, saying American weapons were "locked and loaded" after Pyongyang accused him of driving the Korean Peninsula to the brink of nuclear war.

The US president on Thursday threatened to pour "fire and fury" on North Korea if it continued to develop its internationally-condemned missile and nuclear program.

Pyongyang says its program acts as a deterrent against Washington's aggression and expansionism.