TEHRAN, August 12, YJC -The US secretary of state has called on the leader of Iraq’s semi-autonomous region Kurdistan region, Massoud Barzani, to delay a controversial referendum on independence from the mainland slated for next month. 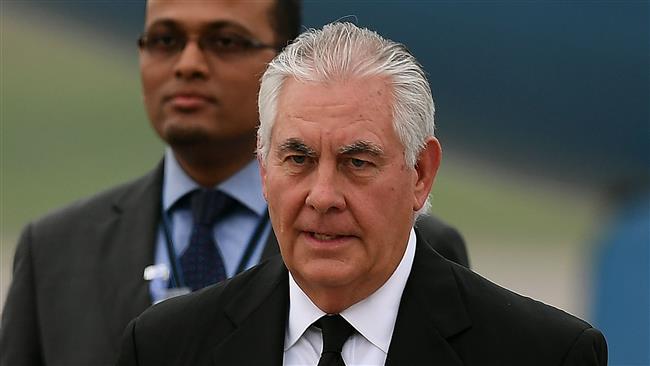 TEHRAN, Young Journalists Club (YJC) -In a telephone call on Friday, Rex Tillerson said Washington “would want for the referendum to be postponed and that the issues between the Kurdistan region and the federal government in Baghdad should be addressed through dialogue,” Barzani’s office said in a statement.

The statement further said, “On the issue of the postponement of the referendum, the President (Barzani) stated that the people of the Kurdistan Region would expect guarantees and alternatives for their future.”

It, however, did not elaborate on Barzani’s reaction to the demand by the senior American official concerning the referendum that is due to take place on September 25.

However, Reuters on Saturday quoted Hoshyar Zebari, Barzani’s advisor, as saying that Iraq’s Kurds will maintain their plan to hold the referendum.

“The date is standing, Sept. 25, no change,” the Iraqi Kurdish official.
The developments came on the backdrop of the US State Department’s expression of concern back in June that the referendum will distract from “more urgent priorities” such as the fight against Daesh terrorists.

Senior officials in Baghdad as well as in neighboring states of Iran and Turkey have voiced concerns over the planned vote, warning against largely Western-backed attempts to partition Iraq.

In June, Iraqi Prime Minister Haider al-Abadi described as untimely the decision by Barzani to hold the referendum.

“Every part of Iraq has aspirations and has a dream, and we respect that, even if we disagree with it,” Abadi said on June 13. “We live in one homeland and they are our partners.”

“We have a constitution that we've voted on, we have a federal parliament and a federal government…The referendum at this time is not opportune,” he added.

His remarks came after Barzani announced in a Twitter message that the northern territory would hold an independence referendum in September not only in the three provinces that make up the Kurdish region but in the areas that are disputed by the Kurdish and the central Iraqi governments.

Following the announcement, the Iraqi government also issued a statement saying that it would reject any unilateral move by regional Kurdish authorities to push for independence.

Turkey has censured efforts to establish an independent Kurdistan as ‘a grave mistake.” Ankara has expressed fears that the potential of creating of an independent Kurdish state in its backyard would further embolden Turkey’s homegrown Kurdistan Workers’ Party (PKK) militants towards an even stiffer confrontation with the government.

In June, Iran also expressed opposition to the “unilateral” scheme, underlining the importance of maintaining the integrity and stability of Iraq and insisting that the Kurdistan region is part of the majority Arab state.