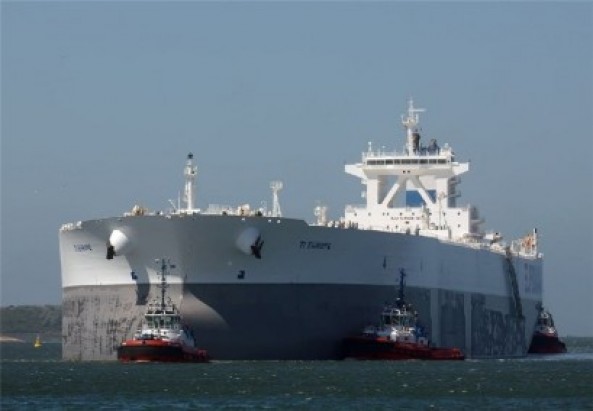 TEHRAN, Young Journalists Club (YJC) - The Russian-flagged VF Tanker-20 discharged around 6,000 tonnes of Turkmen origin crude oil at a terminal in the Caspian port of Neka on Aug. 3, reports said.

According to Azerbaijan’s Trend news agency, citing an unnamed source in the oil and gas market, the voyage was the second by VF Tanker-20 this month to Neka for the discharge of oil from Turkmenistan.

The source said Dragon Oil was loading the third crude oil cargo aboard another vessel operated by the Russian tanker company, but it was not clear whether the shipment was headed to Iran.

There was no immediate explanation from Iranian or Emirati sides. Neither was it immediately clear whether the loadings marked an official resumption of the swap deal.

Dragon, which is owned by Dubai-based Emirates National Oil Company (Enoc), used to ship the crude it produces from its offshore development in Turkmenistan to Neka and receive crude produced by Iran at Kharg Island in the Persian Gulf.

The company moved about 80 percent of the crude it pumps from its 44,000-45,000 barrels per day field through the swap deal, with the remaining 20 percent marketed through Baku in Azerbaijan.

Dragon diverted all export volumes to Europe via Azerbaijan and Russia, which required paying higher transit fees, when the Iran route was closed down.

The swap arrangement was halted during the tenure of former President Mahmoud Ahmadinejad as authorities questioned its economic merits.

Their successors, however, decided in 2016 to resume the scheme with Russia, Kazakhstan, Turkmenistan and Azerbaijan – all among the littoral states of the Caspian Sea.

Yet, the plan has got into a slow start, with the National Iranian Oil Company (NIOC) repairing and renovating the storage and terminal facilities in Neka.

In May, Iranian officials said they had received more than $4 billion from Enoc as part of the UAE retailer's settlement of its debts owed to Iran for pre-sanction oil and gas purchases.

Iran's Supreme Audit Court, which monitors the Ministry of Petroleum's deposits into the state treasury, said that the Central Bank of Iran had received the total amount of $4.1 billion as part of Enoc debts over the purchase of gas condensate.

The collapse of the Soviet Union has given Iran an opportunity to position itself as a major transit route for the Caspian energy. However, plans for building a pipeline to take the region's oil and gas to the Persian Gulf have been shelved amid US opposition.